Horoscopes for the Week of April 22

More Thoughts About The Last Jedi and Disconnects

The reason I'm making so many videos is that I'm tired of hearing Disney execs saying it's only racist, white men who are angry with the movie.

As a woman who has been a fan since I first saw Star Wars on opening day in 1977, I feel it's  important to pipe up with why I personally was very disappointed in many parts. Especially after waiting forty years to see Luke, Leia and Han TOGETHER AGAIN, and we'll never ever get that now.

Now I'm disappointed in both The Force Awakens and The Last Jedi because they don't go together as a continuing story.

How hard would it have been to write a series where the three of them (Luke, Leia, and Han) have to battle some nightmare once more? The writers had decades to come up with something cool and interesting. They didn't need to do ANY reboots of the original trilogy. They could have made something brand new with the legacy characters and introduce new characters for the new generations. They could have still had Rey, Kylo, Finn, Poe, and BB8 very easily and still given us a fresh plot, and our three legacy characters plus Chewie, R2D2 and C-3P0.

I grew to like The Force Awakens when I grew excited about the mysteries and how they might be solved over the next two movies.

However, the writers for TFA and TLJ didn't care about proper storytelling devices and created their own frustrating ways to tell a three-part story. Basically, it's a round robin where everyone is making up stuff as they go along.

Star Wars fans aren't hard to please as much as some of the Powers That Be might want to think. All we wanted was to see our three legacy characters fighting evil, and some cool lightsaber battles. A battle between good and evil. A clear plot.

The Force Awakens had a clear and simple plot. Find Luke. And they did.

I still am not sure what the plot to The Last Jedi was. There were several but at the end of the day, the only person who had character development in any manner at all was Kylo Ren. And even then, he only had a little bit as he still hasn't embraced the dark or the light side. We still don't know what his deal is. We don't know why he wants to go dark. We don't know what spell Snoke had over him and why it wasn't broken when Snoke died. We don't know why Snoke wanted Skywalker. We don't know what Snoke was training Kylo for. We don't know what Kylo himself wants! In The Force Awakens, we knew Kylo wanted to be like his grandfather, Darth Vader. He actually sat and prayed to him. I wanted more of that stuff and perhaps Vader coming to him as a Force ghost and telling him to be good or bad. Or maybe someone evil pretending to be a bad Vader ghost and manipulating Kylo to go even darker. But no, there's no reason or motivation for Kylo to be bad just to be bad. What does he want? To rule a planet? A galaxy? Which one? Why? Who is his team? Why doesn't Hux take him out and become Supreme Ruler? Kylo was way less scary in The Last Jedi and Johnson destroyed Hux's scary charcter into becoming an idiot cartoon character.

Anyway, when you have the eighth chapter of a series, it's usually a good idea to keep to basic plot points, not throw away points just to be clever. Character continuity is a good idea as well as keeping simple facts straight, such as how to use the Force.

Why would Yoda destroy a tree, a living thing that did nothing to him? Did we not learn over the previous seven movies and a bucket-load of books and cartoons that The Force is in and around every living thing?Are not trees a living thing? And if Rey or Yoda already put the books on the Falcon, what was the point of killing the oldest tree? Kill the past? Yoda is a murderer of the innocent now too?

Don't get me started on Mary Sue's big coincidences...especially at the end where she arrives just in time, somehow magically and conveniently parks the Falcon and gets to lift rocks just in time, the only way for the rebels to escape.

There are far too many Earth political statements and jokes. We go to Star Wars to see a galaxy long long ago and far far away. We don't want to hear about arms races or animals rights. Why was it important to free the doghorse things but not the children? Why were the children allowed to stay behind and be slaves? They never went back for those kids and helped them. They just let them be slaves forever. Even in Rudolph the Red Nosed Reindeer, they went back for the misfit toys. Not in Star Wars where suddenly everyone is selfish instead of altruistic.

I know Johnson is likely setting up a whole children break free from their masters in his trilogy but why couldn't we finish our Skywalker story in a proper manner first?

There was ZERO reason for Luke to die. ZERO. He's a goddamn Jedi Master. He's not going to die force skyping. SOOOO stupid and painful. I hope JJ Abrams brings him back, and has him act properly like a hero, but I doubt that's going to happen.

Check out my Lunch Time Tarot Card Readings! I'll be offering Free readings from noon to 1 pm EST today and perhaps every day if people show up! Just type your question into the chat window! I'll answer them in order. Please don't ask about health or gambling! Follow me on Twitch to know when I'm online. I'll also do nighttime tarot card readings but you'll have to follow me to find out when I'm online. Watch live video from sephera666 on www.twitch.tv
Posted by sephera at 09:08 No comments:

Sephera is now on Twitch! 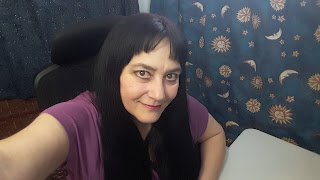 Yes, it's true. I've begun a Twitch channel. It will debut on April 11 at noon EST. I will be reading tarot cards live for whoever pops in and wants a reading!

Twitch
Posted by sephera at 15:53 No comments: