Derek Clendening Horror Author: Interview with Sephera Giron: Derek: So, the Narcissist’s BLT was originally meant to be a Ravenous Romance title. Did it change any when you made it an independent title...
Posted by sephera at 13:24 No comments:

Here's the short list for the Bram Stoker Awards!

For more information on how to attend the awards ceremony in Salt Lake City this year go here:  http://www.stokers2012.org/
Posted by sephera at 11:23 No comments:

I used to attend the World Horror Convention every year from the very first one. But in recent years, my life has been too turbulent to attend. This year I had hoped to go but flying to Salt Lake City is very expensive from Toronto and then there's all the other costs of going. With work being slower than it ever has been in my working life, I'm hard pressed to scrape up money for day to day living, let alone go travelling. Hopefully my finances will turn around soon but it won't be in time to hit WHC unless I get some kind of huge option for one of my books. :)

In the meantime, those of you who are on the fence about going, you should totally go. WHC is a fantastic opportunity to meet other artists in the genre. Writers, artists, editors, publishers, agents, filmmakers and actors all attend WHC. It's a more literary focused convention with loads of panels and launch parties.

One of the rituals, besides initiating newbies into the fold is the Annual Gross Out Contest.

This is a contest where contestants read out loud the most foul disgusting story they can imagine. It used to be that you had to write the story while at the convention but now people plan ahead for months. After all, you have to top some of the most vile disgusting images you never want to imagine delivered by mostly professionally published horror writers over the past decade or more. It's a daunting task by this point!

There's a time limit and you have to hit your punch line before it's up or you get dragged from the stage by bouncers. Sometimes you will get gonged and dragged away before time's up because you suck.

I myself never entered, I don't think. I've thought about it a few times but in the end, don't think I can beat out Rainy or Wes or Keene or Wrath or Ed Lee or Jack Ketchum or John Skipp etc. In fact, most of them have been judges at some point or another.

Sometimes people use props. I remember the year of "stork-cock" and everyone eating live maggots including the audience. I believe it was all Keene's fault.

But most people just use their words and take us to far away lands where we want to floss our brains out upon our return.

If you want to enter and please do, here's a link to the guidelines for this year! 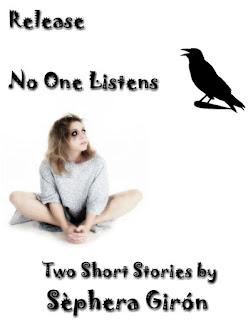 
The two stories, RELEASE and NO ONE LISTENS are FREE for today only. Download them, enjoy them.

If you like an author's work, it really helps the author if you leave a review or click like no matter if it's on Amazon, Smashwords, Goodreads, or any other site!

Have a great Family Day!
Posted by sephera at 12:11 No comments:

This is the last week of the popular show Anne of Green Gables. Order now as tickets are nearly sold out.

Meadowvale Music Theatre Anne of Green Gables
Posted by sephera at 02:18 No comments: