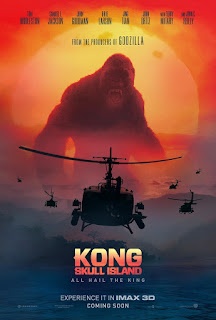 Last night was kind of funny. I had seen Kong: Skull Island in the afternoon and was all hyped up to write a little blog post about it. As I settled in, I heard a groan and saw all my bookcases begin to lean over. I ran over to protect the TV and books fell like rain on me and the floor as the bookcases exploded. I felt like King Kong battling books.

I was already battling a cold and now the subsequent dust and clean up has exasperated my illness. But that doesn't mean I can't finally settle in to write a few words about Kong: Skull Island as I cough and sneeze with the cold that's circling the city and now it's my turn to suffer. 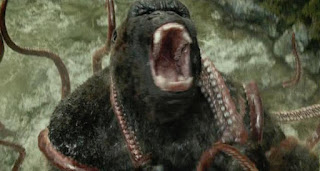 Love My Kong
I had been cautiously excited to see this movie, as I am about all movies I'm excited like a little kid inside about but ultimately end up disappointed.

Kong didn't disappoint this Great Ape fan. Whew. Seeing it in 3D was even better and it was still playing in one of the big theaters. There were six of us in the theater.

I loved the music. It was an fantastic blend of music that was written about Viet Nam and around the  time of Viet Nam. I remembered all of it. I was a teen and heard radios in stores and at friends' houses and watched the news with the horrors of the war. Weston Osche posted on Facebook that he went to buy the soundtrack and none of that great music is on it. Boo!

The story takes place in the seventies after a little snippet from 1945.

John Goodman and his team of nerds with an army escort is going to look for ... monsters.

They toss around some bombs, which is so typical in these movies. They don't do a flyover first to see what's down there, they just start dropping bombs. And wouldn't you know, they get one furious gorilla raging at them. Somehow he is able to catch the planes and kill some soldiers. Like how cats can catch birds. I kept wondering in my head, why is there only one gorilla? Where's the tribe for backup?

Well, luckily our gang runs into a guy who speaks English and he tells them All the Things. Whew for that! Otherwise, our gang likely would have become stew or maybe sacrificed to Kong by the tribe that doesn't speak English, like in other movies.

End of an Era
I loved how they made the movie in the seventies. Just before technology exploded but enough technology for some things. That was a good call. Cumbersome film cameras, whining flashes, walkie-talkies, tapes.I like how they stayed on Kong Island. Although, who knows, maybe they go back to get him for New York? Who knows? We know he's not dead because he's in more movies coming out over the next couple of years. Since he has no children, it has to be him.

They had some nice touches with some characters. We cared about most of them. However, the snap in Lieutenant Colonel Packard wasn't truly believable. It was weird how he was obsessed. I suspect there's a missing scene earlier in the movie that we'll see in some deleted scenes on the DVD that gives him a little more character development or motivation. It wasn't believable that he'd risk everyone to fight a gorilla that's over 125 feet tall when it's already proven that nothing, not bullets, bombs, fires, torches, helicopters, can do any real damage to Kong. The Lieutenant had no plan like a booby trap. Yes, he's trained to go down fighting, and yes, he took it upon himself to get revenge for his men, yet he's the one who dropped the bombs to upset Kong and the rest of the creatures to begin with. Sheesh.

It wasn't really clear or set-up why Kong liked the woman since she was far too small for him to even see what she was, (I'm sure gorillas don't have very good eyesight), or do anything with besides hold and eat and pull apart. I guess the story had to do that in case they come back for him in a future movie with her as a lure.  He's way too big to bring to New York. It would be impossible. Where would you put him? I won't believe it if they bring this version of Kong to New York.

I liked the character of Marlow. The name isn't lost on me.  I'm glad they used him as they did.

Things that Bugged Me
No bugs. Like, surely there were tons of horrific bugs in this place. even mosquitoes, flies. They showed huge flies on the yak, so those things would be cruising around.

No sense of the weather. Everyone was dressed differently. Though often soaking wet with swamp water or mud or worse, no one seemed cold, itchy, disgusted, or hot or a bug magnet. Have you ever watched Naked and Afraid? That's one of my favourite shows. Those people are coated with bug bites and freeze to death even in the jungle. But in the this movie, I guess the climate was comfortable for everyone. No sweating, no thirst, no heat rash, or sunburns.

No sense of awe. Okay, if I saw an ape as tall as a skyscraper with a mouth full of teeth with each tooth as long as a car, and he's pissed as hell and wants to kill me, I'd be freaked, I'd be awed, scared, shaking, crying...no one seemed to think it was weird that this giant ape exists. Sure they talk about it.  There's even a running gag, "Uh, aren't we going to about this?" Even in Jurassic Park, people are awestruck by seeing a dinosaur, whether from a distance or chasing them. You can't tell me that in real life, that Colonel would risk the life of all after he saw even one of those skull lizard things? Seriously? He already knows he has no weapons so what's he doing? They know there are flying creatures too. Sheesh. No fear. No awe.

No warning. Okay, there are a couple of scenes where Kong SNEAKS UP ON PEOPLE. Like seriously. Something that huge doesn't just sneak up on you no matter what you're doing. The best parts of Jurassic Park are when the vibrations of the T-Rex is felt, long before it's seen. The sense of knowing something is coming, but what? From where? How big is it to jiggle that drink or that car? Wouldn't Kong rumble whether he's in a tree or breaking trees by walking or just walking? Kong's way bigger than any T-Rex. So you'd hear him. He can't surprise you. No way. 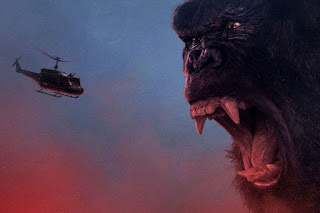 How Big is Too Big?
Sometimes I felt that Kong was just too huge. One minute a helicopter can fly into his mouth, judging by this shot, yet the girl fills his palm. But that's me. I'm picky because I love these movies and like to notice behind the scenes stuff like height discrepancies.

I totally recommend Kong: Skull Island! I loved it. The soundtrack is fantastic. The special effects rock. The story is good. I was only a little depressed about how they lured him out and then tried to kill him as he got some good shots in himself. He lives at the end and I liked that.
Posted by sephera at 14:55