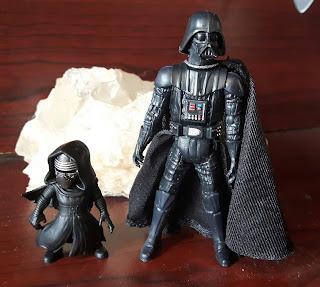 Spoilers for All Things Star Wars

A breath of much-needed fresh air in the Star Wars franchise.

I was saving myself for this show for a year, using it as a carrot to get my own writing projects finished, but I finally realized in this never-ending pandemic that my drive to write isn’t great but my drive to watch and absorb and learn is huge.

One of my sons ordered Disney Plus and now I have it, so no more excuses.

First of all, some background about me and Star Wars for those who might not know.

I saw Star Wars which became A New Hope on opening day in 1977. I loved it, it changed my life, and I saw it 28 times that year.

I was a bit disappointed in the prequels because there was no Luke, (who was my big crush though I knew there was no Luke going in), and as I said to the kids at the time when we left the theatre, “There’s too much war in Star Wars!”

I greatly wished for an Adventures of Luke Skywalker TV series starring Mark Hamill for years and years but it never materialized.

Star Wars has always been in my life since I was a teen, whether percolating in the background or out front and personal. May the Force Be with You!

Which brings me to The Mandalorian.

Last weekend, I sat down and watched it all, almost all in one sitting, well at least up to Season Two Episode Five.

After I watched the first couple of episodes of The Mandalorian, I felt like I had chugged a pint of cold beer on a hot summer day. Ah, sweet relief. Such wonderfulness after so much trauma and disappointment. 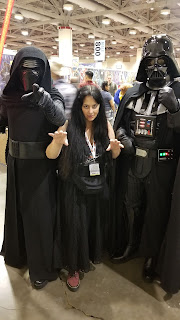 Usually, I watch a Star Wars offering a few times before I say anything, but I’ve only seen each episode of The Mandalorian once so this will be a very general observation post.

Like all Star Wars offerings, I didn’t watch anything about it or read about it or even know who is acting in it before I watched it.

Obviously, I knew there was a “baby Yoda” since there is no escape from the memes and toys. I knew from the very first time I learned about him that he wasn’t “baby Yoda” but a character in the same species.

I didn’t know what the time period of The Mandalorian was but doubted that there would be Yoda in it. We saw in the prequels that there are lots of Yoda-creatures in the Star Wars universe.

I saw a few but tried not to look at images from the show. I had a sense it was like Lone Wolf and Cub but Star Wars-style.

Watching The Mandalorian, I remembered what drew me back to the theatre 28 times that first year. Not that The Mandalorian is THAT good or anything but just the fun of the Star Wars world.

What I love about this show is that the writing and the visuals capture the “feel” of a Star Wars story. Somewhat gritty, though sometimes glamourous with marvelous little touches if you look. This story is in a gritty land like SOLO was (I really liked SOLO, strike me down with a Laser sword if you must!)

It feels like home, the set pieces, the costumes, and so on.

I wasn’t sure what timeline the show took place in for the first few episodes. They might have said but I could have missed it. They talk about things like the second Death Star and then come right out and tell us near the end of the first season. Eventually, I determined it was five years after Return of the Jedi.

I have a theory that they are taking Grogu to train with Luke at the Jedi School. Then Kylo Ren, well, Palpatine, or the Knights of Ren or maybe they really will make a young Kylo Ren destroy the school and then, what about Grogu? Will he survive? It’s already pointed out by fans that Grogu was likely the only Jedi to escape when Anakin destroyed the Jedi school. Although he would have been a very tiny baby as he would have only been a couple of years old if he’s fifty in The Mandalorian. So, someone might have saved him.

I have a hope that they will use Mark Hamill as Luke, he deserves to play him after all these years, and either age him down or not. After all, Obi-Wan aged about forty years in a few between Episodes Three and Four! How did he go from Ewan McGregor to Sir Alec Guinness in about fifteen years? I always laugh about that one! So, no reason Luke can’t go from twenty-five-year-old Mark Hamill to sixty-five! Being a Jedi ages you!

They aged down Hamill in The Last Jedi so the precedent has been set.

I love how they always point out, either visually or actually have jokes about how the Storm Troopers can’t hit their targets. There are some really funny bits.

They have our buddy “the toaster” running around.

Grogu acts like a little kid and does kid stuff which is great. It’s not too cloying or cute. He’s very smart in some ways and just a little kid in others. I guess some people got mad when he ate a frog or the frog eggs. He’s a carnivore, that’s what he does! I like how he’s mesmerized by the ball handle on the ship, it’s like a miniature Death Star. We learn it’s connected to the Jedi Temple. We’re not sure if Grogu is light or dark side, if he’s really a Jedi or a Sith or something else.

The Empire is after Grogu so we’ll see what they want him for and if they’ll succeed.

Grogu is slowly growing and aging before our eyes but it isn’t pointed out, it is just happening like real life.

There are some great characters that The Mandalorian meets along the way. Each episode is like a weekly adventure story as they used to do shows in the seventies. All of the acting is great.

I saw some people complaining about Asohka but I haven’t dug deep enough to understand their issues.

I haven’t really watched the animated shows but I know she’s in some so I guess there are some variances that fans don’t like? I thought she was great.

The Man in the Mask

The Mandalorian himself is like a cowboy from an old western or something. Somehow, we can tell what he’s thinking by the tilt of his head, the photography, shadows, lighting, music without him saying a word. “A strong silent type.” And like before we saw Kylo Ren, we wondered what he looks like.

I must say, before I saw Kylo Ren I thought he was either a robot or a horribly disfigured insect creature and was shocked when he was neither. So, I had the same thoughts about The Mandalorian as I never googled the actor until after I watched the show. What does he look like? The mystique of the mask is powerful.

As an aside, that’s one thing I’m finding in this pandemic. I find a lot of people very attractive with the mask and then am disappointed or perhaps just not as enamored when they lower it! Lol. Something about a mask...I guess that’s why I’m not an anti-masker! Ha!

Anyway, we do get a peek at Mando near the end of Season One and can see he’s a good-looking man who seems kind and though some of the mystique is gone, we still root for him.

After the first couple of episodes, I settled in and actually relaxed watching this show. I don’t expect it to kick me in the head or disappoint me or taunt me with enticing plot points that go nowhere. The Mandalorian is so far delivering everything we need in a weekly television series based on the Star Wars world.

The show employs a lot of familiar lines, but they don’t fall flat or feel forced or clunky.

The use of humour in this show is perfect from the joke itself to the timing and execution.

Lots of callbacks and Easter eggs for Star Wars fans. I’m sure I don’t know half of them myself. The sound design is fabulous. Lots of little details.

This show has a lot of heart. We connect with characters, their motives are clear, like in the original Star Wars. We don’t have to worry about subverted expectations which are different from plot twists.

There are several directors yet the episodes all feel coherent, as any good series.

As of this writing, Bobba Fett has arrived and there are two episodes left! 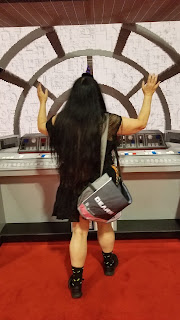