Come by and say hi! 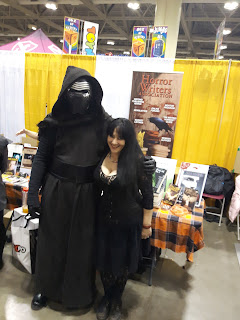 Oh, Kylo, why don't you ever just want to go hang out over a cup of coffee and discuss how you don't need to make yet another Death Star? 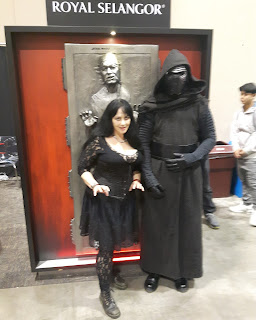 Is Han trying to tell us something? You? Me? What does he want? 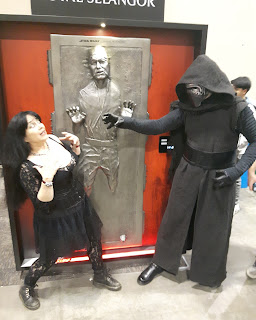 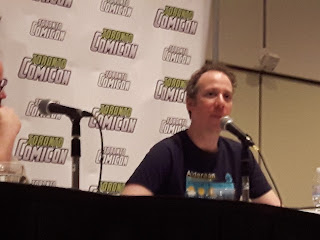 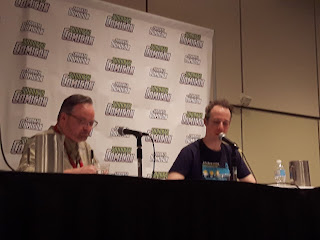 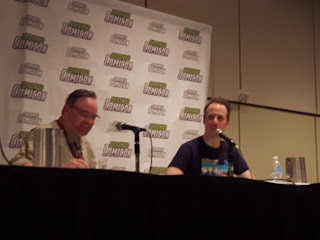 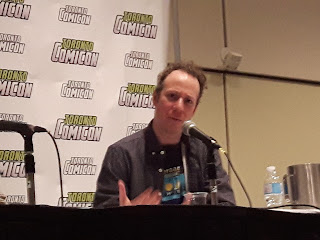 I had been looking forward to seeing Kevin "Stuart" Sussman ever since he was announced! Big Bang Theory is one of my favourite shows for modern day current comedy. In fact, it is one of my "I want to write for this show" bucket lists, which I'm missing the boat on since I wouldn'teven know how to submit. Just like wanting to write an episode of Carnivale back in the day, or a Star Wars Kylo Ren/Luke Skywalker spinoff book. I guess I'm like Stuart in that way. Will never get to that next level.

I watch TBBT all the time. I had it on earlier. I was on a panel about The Big Bang Theory a couple of years ago at a convention, I think it might have been Ad Astra. So, yeah, it was cool to see one of them up close. I always feel sorry for Stuart. I actually get angry at the gang sometimes with how they treat him. There's also a weird pervy undertone to Stuart that comes out rarely, but you can see it in early episodes. Like when he whips out his phone to take Leonard's photo for the Hall of Fame as the only guy to get a date while actually in the comic book store. I think the time he and Raj hang out in the Wolowitz's hot tub is one of the best. It's creepy and hilarious.

I actually got a front row seat. That's what happens when you spend an hour in line! Kevin Sussman was really good and the interviewer was good. Sussman actually seems like he's a lot like Stuart in real life which, to me, is endearing. He was joking about how he kept going off track in the interview. I was going to tell him if I'd had the nerve to put up my hand, that I'm the same way in interviews, it's that ADHD thing! He was clever and kept the conversation lively. We heard little stories and it was all great fun. He doesn't seem like he has a "star" attitude at all.

Of course, as always, my phone pictures are terrible even though I was in the front row. I need to invest in a good camera. A small good camera. 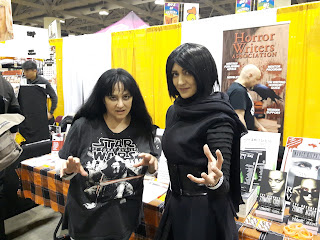 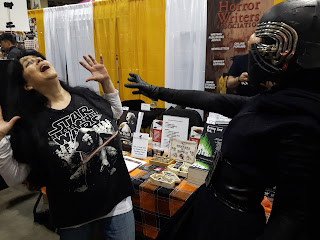 This lovely Kylo came by the booth. I told her to come back when I had my corset on. Apparently, she did when I was seeing Keven Sussman. Maybe she'll come back on Sunday afternoon! She was a good sport! 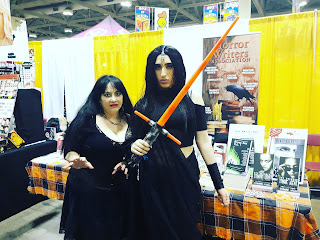 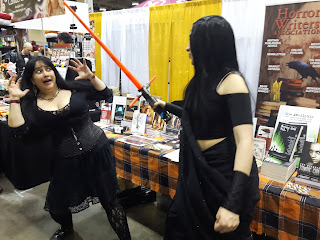 This Kylo was fantastic. She had a big saber scar on her face. 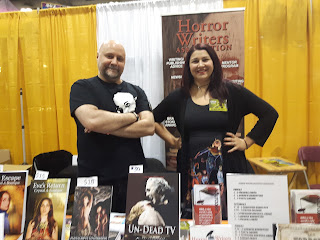 Brad Middleton and Alessia Giacomo are holding down the fort at the Horror Writers Association Booth for the morning and afternoon shift. Of course, I totally forgot to take pictures of other people actually at the booth, like Tonya Liburd, Stephanie Bedwell-Grime and Andrew Robertson. Most of us are back on Sunday so come on by! I was side-tracked by my celebrity crushes and Kylo Rens. 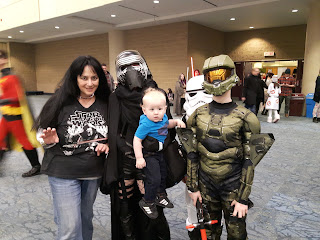 This Kylo Mom had a great outfit that you can't see here. Great stockings, garters, and all that. I'm pretty sure these are all her kids! 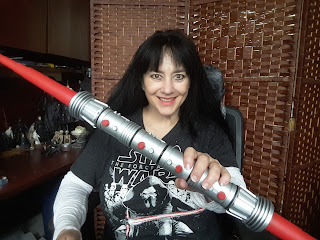 I was happy to see Ray Park, who played Darth Maul, in real life on Friday night. I went to his panel, I didn't actually get to talk to him or anything.

I've babbled on before about Darth Maul. How excited I had been for Darth Maul, how furious I was when he was killed so quickly and that horrorshow Jar Jar jarred me into oblivion and I actually hated Star Wars for a while and almost didn't see The Force Awakens. Yes, I'm aware Darth Maul has a life in spinoff books and TV shows, but he sure didn't in the major movies. At any rate, decades later, I'm willing to forgive that movie since I don't remember much about it anymore. I wore one of my Darth Maul watches and a Kylo Ren shirt.
Ray Park's work is great. He's in other movies as well. His talk was really good. He told stories about several movies. Some of the audience questions lended themselves to fun stories. 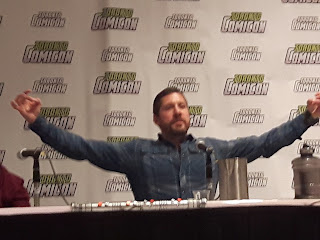 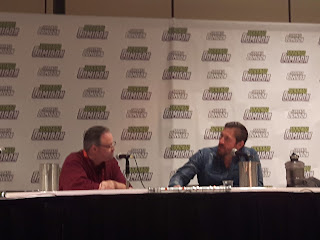 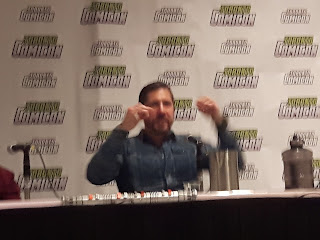 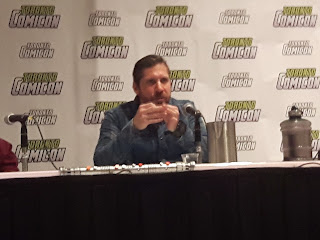 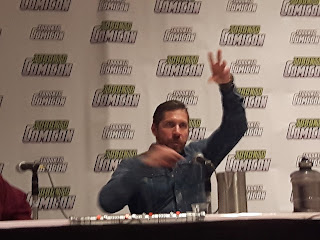 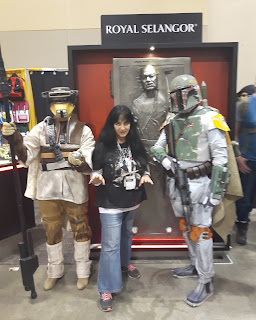 Han Solo in carbonite was right across from us the whole time. As is a little silver Kylo Ren figure for $299 plus tax. The Han Solo means no one sees our booth because everyone is taking pictures in front of it. We do what we can! 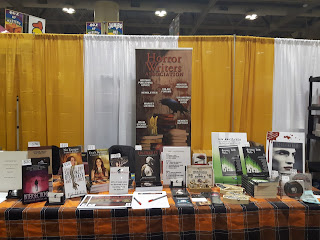