Getting Excited for The Last Jedi 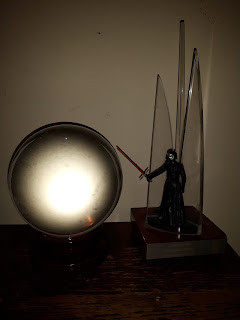 So it's been a couple of years. I've watched The Force Awakens a couple of times and some scenes, namely Kylo Ren scenes, many times.

My favourite scenes are:

Kylo Torturing Rey
Kylo reading Rey's mind and she ends up reading his.

There is so much in that scene that could lead to so many directions in the plot.

First, there is a sexual tension. They each think the other is hot. Kylo doesn't want to hurt her or he'd be angrier.

They might be brother and sister, or cousins, or something else somehow related which follows the Luke and Leia twins’ plot line. And we all can agree that The Force Awkens is pretty much A New Hope so I’m sure originally they were very much related.  I’m sure that has changed over the past two years as fan theories about “Reylo” abound.

We see The Darkside in Rey as she spits out Kylo's most secret pain.

Although some people scoff at the use of lighting, I love how lighting is used throughout the whole movie, especially when Kylo Ren kills Han Solo.

I've written before how delighted I was when Kylo Ren removed his mask and wasn't a robot or demon. He was a very nice-looking man. In soft focus, Adam Driver looks like a Disney Prince.  And Kylo Ren has my favourite kind of hair: dark, long, and wavy. I'm sure Rey was delighted as well.

I love his arrogance when he calls off the hunt for BB8. He thinks that he has all the answers, but he screwed up badly. He didn’t realize that he’d actually like her when he mind probes her later on. Poor Kylo is having a bad day and it’s barely begun.

Rey's Vision
The first time I saw this scene, I immediately thought of Hellraiser movies when the walls split open to reveal the Cenobites. I still think of it every time. I love when Luke’s hand touches R2D2. The first time I saw that, I thought we’d see Luke very soon. Boy, was I wrong! I still say that’s the Millennium Falcon flying away from Jakku. Other people say it was a trash ship or another ship. I still say it’s the MF! So Rey may be Ben’s sister or Luke’s daughter and Leia hid her so that Ben wouldn’t find her since he was turning to Snope and the Dark Side.

The LightSaber Battle
I love this fight scene between Kylo Ren and Rey. I love the music swelling as she pulls out the lightsaber from the snowbank even though it’s so hokey and corny and unsurprising. I thought for SURE Luke would walk out from the woods and do battle with Kylo Ren. Nope.

I love when Kylo and Rey have the blue saber up and red down in the snow as they come to a standstill. It’s scary and sexy.

It’s great when she’s circling Kylo Ren who is dying in the snow from his blaster wound in the abdomen and everything else, and she could totally take him out. Her look is pure evil. She hates him but she also is attracted to him, curious and doesn’t want to kill him just yet. Does she feel the pull of a brother? A cousin? A romantic attraction? Does she want to torture him, slice him up piece by piece? He could really be Darth Vader with no legs and arms.

But Chewbacca flies up in the MF. Is Han Solo on board? Did Chewy save him? Was the HS death a set-up between Han and Kylo to fool Snope and somehow get Kylo trained to the Light Side? Is Kylo The Last Jedi and Rey the new Darth Vader? Will the Knights of Ren join the Rebellion?

I’ve spent the past two years going back and forth about various theories about where I think the story will go. The thing is, whatever they present as The Last Jedi, may or may not be even close to what was pitched years before. The writers may have noticed fans expectations and theories and tweaked plots/characters to avoid any Jar Jar situations.

So when it comes to Kylo Ren, who knows what happened with his story arc over the years? At first, he wasn’t well received and now, he’s likely the most popular new personality in the franchise.

I go back to the idea that I am torn in half about if he goes dark or light. However, to go light, he has to get a ton of forgiveness as he’s murdered tons of people. It’s not plausible he could be The Last Jedi. Hopefully he’ll get dark and evil and twisted. I’ve seen many fan theories and artwork over the year. Some maybe true, some may not. However, like any soap opera, comic book villain, he has to lose his handsome looks. The face scar is the beginning. He’ll likely lose a hand to be in step with the rest of the family. And some legs will likely go, if not this movie, the next one.

I like the idea of a romance between Rey and Kylo. That would be so cool. I wish there could be a parallel universe where that happens for a few weeks and then one of them has to die. However, for the Last Jedi, I’m sure they continue to battle. Maybe Rey will lose a hand.

Han Solo may come back. He may not have died. Kylo Ren Ben might have Force Healed him as he fell. You never know. And Chewbacca was in on it which is why he only wounded Kylo instead of  killing him. Doubtful but you never know.

Will Kylo Ren and General Leia have a light saber battle? What will Leia do about Han’s death? Or is he dead? Will there be a funeral? Flashbacks? Are there any flashbacks with Han and Luke discussing Ben or Rey or anything else? Is Rey Han Solo’s daughter with Laura Dern?

I imagine Luke trains Rey and they go back to see Leia. There is a Plan to take down the First Order. Leia and Rey have to confront Kylo at some point. Kylo continues his training with Snope. He is conflicted but eventually grows darker with rage at himself and the galaxy. He has to face off against Luke but I don’t know if they will drag that out to the third movie.

Will Billy Lourd be used more in the second movie? Will she become more prominent in the third movie as they have to replace Leia’s iconic role with another similar type person unless that’s Laura Dern?

Is Finn born to the Force?

I’m not too invested in the other stories as you can tell.

Well, I’d better get back to work. I have a million theories and they change by the minute. I’ve tried to avoid the TV spots but I’ve seen bits and pieces by accident. Hopefully there are no real spoilers in the teasers.

I'll know all in just over a week.