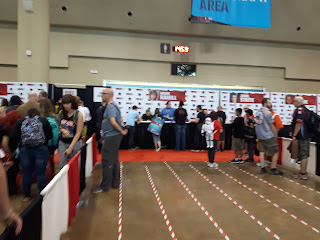 We all have our bucket lists. Some items are secret. Some are obvious. I got to strike off a bucket list item this weekend. After nearly forty years, I saw Mark Hamill in real life. Thank you very much, Fan Expo!

I'm still in outer space and likely will be for another day from being star struck and from reading tarot for so many people! I'm not saying it's a bad thing, but it means I'm not recognizing people or making sense so we'll see how this blog goes! 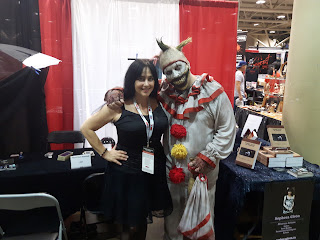 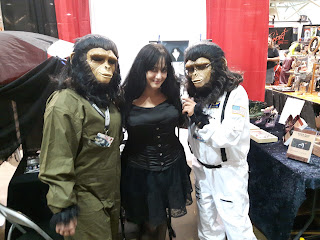 Fan Expo 2016
When I arrived on Thursday, I set up my booth on the last row of the Horror aisle. I was across from Troma and a Walking Dead photo op display. I was happy. I need a better umbrella but this one worked. I hung some banners from it, circus style, as I was going for a freakshow feel to match my presentations.

Many people came by for tarot readings. It was non-stop every time I came back to the booth, which was fantastic. I enjoy being busy.

On Friday, I had three presentations so I wasn't at my booth much at all. Dorian, Brandon, and Kish held down the fort for me all weekend. They were great at helping people wait their turn. 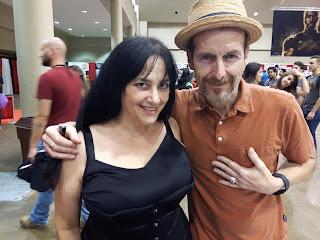 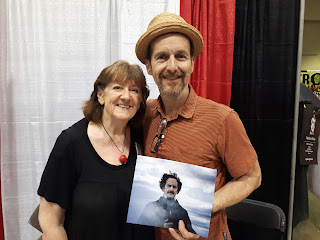 Denis O'Hare
I was returning from the bathroom when I spotted Denis O'Hare chatting to Nancy Kilpatrick at her booth, which was back to back to mine. Of course, I yakked with them as well and took some pictures. I returned to my booth and read much tarot. 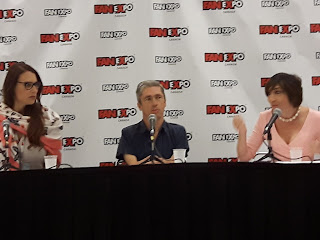 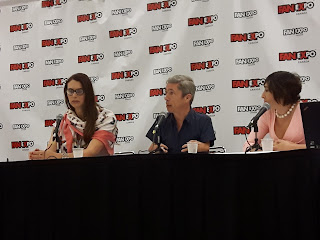 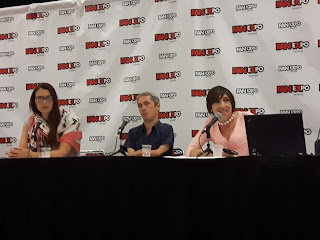 Cast of AHS: FreakShow
I was able to look at the cast of AHS all day from my booth. It was pretty cool. I went to their panel even though I should have been at my booth. How often do I see people from one of my all-time favourite seasons of favourite shows? I never did go over to speak with them, I was so very busy running between buildings. 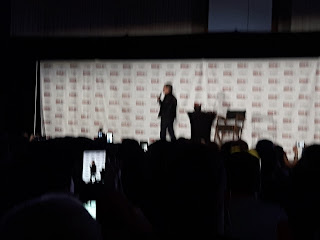 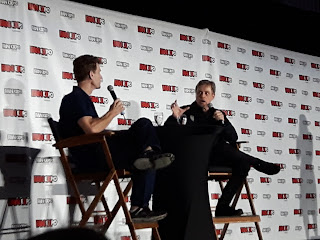 Mark Hamill
Well, I am very happy with how the weekend went with regard to my inner fangirl. I was able to get up close to him and watch him like he was a caged animal at the circus for a few minutes every couple of hours. I hope I didn't creep him out but he's used to black-clad figures lurking a few feet away. I just was in awe to see him in real life. Yes, I meet tons of celebrities and shouldn't be starstruck, but I am.

I attended both of his presentations. One was on Friday and one was Sunday. He must have been exhausted all weekend, likely from shooting schedule then into these tours.He was in Salt Lake City on Thursday for ten thousand fans. I think we had about three thousand at each presentation. 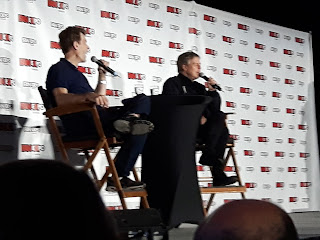 He's a great speaker, and the time went way too fast.

I'd take a peek at him when I'd hit the rest room as he was on the other side of the building from me. It was so cool knowing he was there.

Walking past Mark Hamill every day gave me that same sense of, "How cool is this?" This whole resurrection of Star Wars over the past year has given me a re-connection to parts of my teenage self that I'd lost for many years because of life stuff, like everyone else. The Force Awakens awakened my interest in all kinds of stuff and of course, launched my new obsession with Kylo Ren's character.

Kylo Ren at Fan Expo 2016
I was reading tarot when a Kylo came by and told me to take his picture. Of course, I asked Kish to do it and I felt so bad for the client waiting for a reading but heck look at this young man. He's a great Kylo Ren. And hey, if you're this Kylo Ren, please let me know who you are so I can tag you on FB or tag yourself!

Then another Kylo Ren in a cool corset came by so three of us posed. However, I wasn't done with poses I wanted with the first Kylo Ren I had spotted days before. I needed to get a grip though and get back to my client. I hoped he'd come back on Sunday so we could take a couple more posed pictures but he never did, not that I blame him. haha 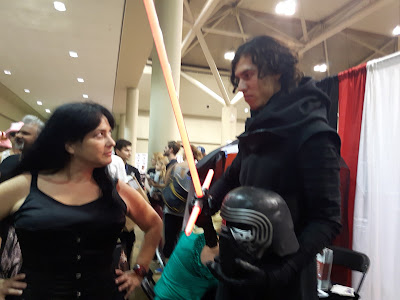 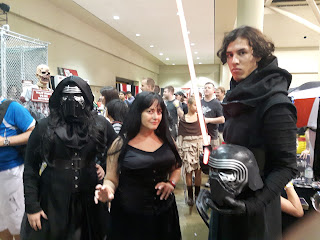 I had two panels on Sunday so was away from the booth a lot for a chunk of time. I also had several media interviews over the course of the weekend, which was great! 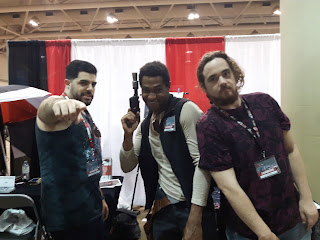 It was an amazing weekend. Thank you to Fan Expo staff, all the staff on every level, especially Lance. Everything went smoothly for me from set-up to my programming and so on. The celebrities were all nice from all accounts. Venders rocked as always.  And I got to see one of my teenage crushes. What's not to like? 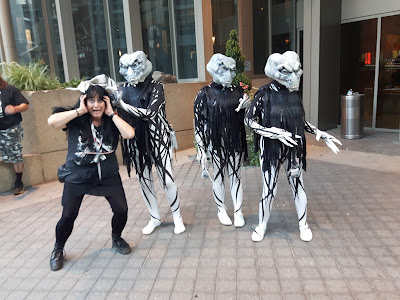 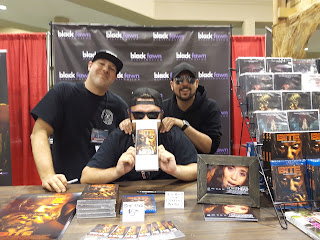 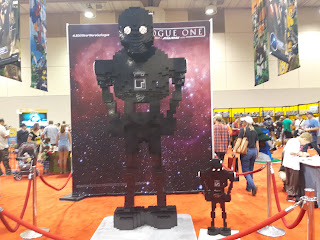 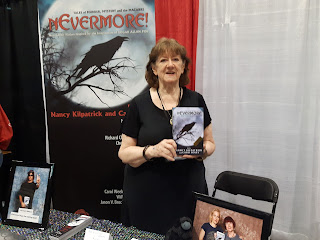 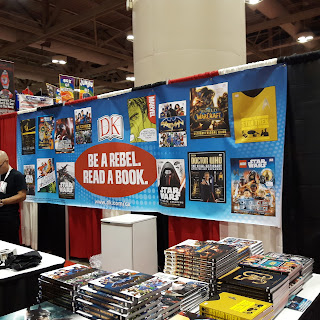 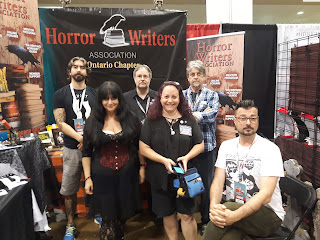 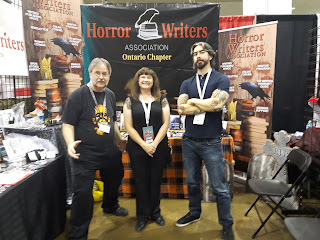 One thing about living so long is that I get to knock things off my bucket list. Some things I did years ago but others I'm still trying to get done. And of course, like everyone else, I add a few items to my bucket list as life chugs along.

Here Are a Couple of Items I've Crossed Off My Bucket List Over the Years
See Mark Hamill in Real Life (he's been married forever so that's as far as that wish goes! lol but...there's always A New Hope according to my inner fifteen year old)
Stay at Stanley Hotel (finally did it Oct. 2015)
Be in a movie that premieres in NYC (Slime City Massacre)
Be reviewed in Fangoria
Be interviewed in Fangoria
Be published by Leisure
Meet Peter Straub
See Stephen King speak in Real Life
Meet Shirley Temple (and I got her autograph on her autobiography)
Meet Judy Blume (I got to see her speak and got her autograph in 2015)
Go to England and see Shepherd's Bush ( 1976)