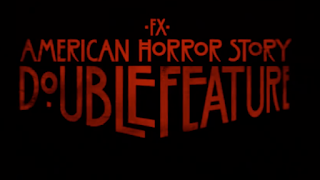 Oh, Ryan Murphy must be in my head! Maybe not!

But wow, a horror story with my favourite AHS cast member, Finn Wittrock, playing a WRITER!

A crazy writer, perhaps like Jack Torrance, or perhaps not, you’ll have to watch to find out!

And yes, Finn-Harry, writing is hard. But the lure of fame and fortune at any cost is harder, isn’t it?

I’m loving this story so far. 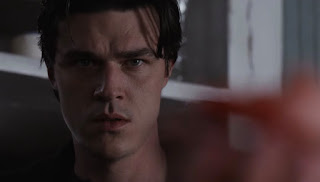 I’ll try not to be too spoilery and since it’s just the beginning episodes, anything can happen as this is Ryan Murphy after all!

Harry (Finn Wittrock) and his pregnant wife (Lily Rabe) and their pre-teen daughter, Alma (Ryan Kiera Armstrong), a virtuoso violinist move into a creepy house in Massachusetts so Harry can find his muse for a TV pilot his agent needs him to write as Hollywood is calling. 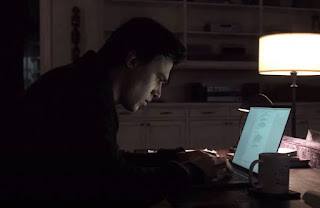 This is the first time for me that I’ve seen Finn cast as a grown-up. Of course, I’ve not yet had a chance to see all his work as I’m still waiting for some to be released here in Canada. I saw him in Judy and he played the husband of Judy Garland but he wasn’t a family man. In this show, Finn is a dad! No more pretty boy young angry monster roles, I guess…our Finn has grown up.

Well, we know he’ll likely be back to naked push-ups in Season Two of Ratched so don’t despair!

I love seeing Finn as a husband to a pregnant wife and with a daughter. It’s fun and he does it well.

(He's married with a child in real life so he knows what to do!)

Harry has huge writer’s block as all of us writers who face daunting deadlines get. 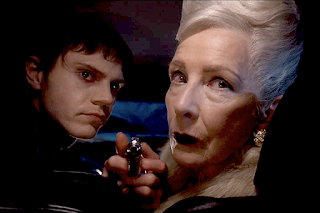 Harry is excited to meet a couple of rich and famous writers who live in town. They want to share their secrets of success with him. Of course, these authors with their temptations are played by Evan Peters and Frances Conroy who look like they are having the time of their lives vamping it up as they lure in reluctant Harry. 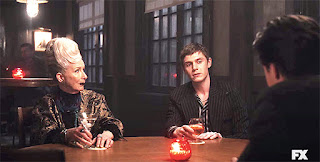 Harry is faced with the choice of taking a little pill to enhance his writing abilities.

His daughter also learns about the pills when she spies on him. She’s been frustrated with her violin practicing. She’s a virtuoso but stumbles on a passage in the music.

Mom is a home decorator who seems to be lost in the shuffle of family talent. No one really takes her seriously, not her writer-husband and not her violinist-daughter.

The drug brings fame and fortune to those who have real talent. As well as blood lust. To those who don’t, they turn into despicable insane vampire creatures. 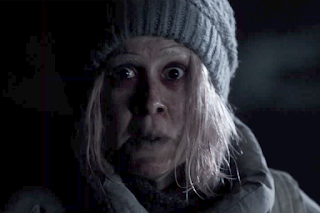 Harry takes the drug and writes up a storm.

His daughter sneaks the drug and plays up a storm, no more stumbles!

Mom doesn’t know why her husband and daughter are obsessive assholes.

In the meantime, we meet Sarah Paulson, Macaulay Culkin, and Billie Lourd as well as some other franchise favourites.

Billie, (who is one of my lady AHS favourites along with Emma Roberts who I hope is in this but not sure, they did both just have babies in real life) plays a tattoo artist dentist!

Sarah plays an addict called Karen which I’m sure is a hilarious nod to the current state of Karen in our modern times. Sarah is so far doing her usual great job of stranger in a strange land.

Macaulay plays a writer who flirts with the idea of taking the drug. We’ll find out later if he has talent or not. I'm loving watching him as an adult. 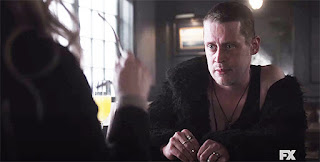 I’m sure that eventually Lily Rabe will discover the drug and we’ll find out whether she has talent or not. Right now, they are playing like she doesn’t really, her decorating abilities are rather stale but they may be tricking us for a twist ending where she’ll survive and everyone dies. Or maybe the baby has talent and she doesn’t. Or who knows what kind of crazy Murphy has in mind for that pregnancy!

Anyway, so far so good.

I’m hooked in as always.

Can’t wait for next week!

Oh, and as a little side note, Finn was born in Massachusetts so there's that little homage as well! 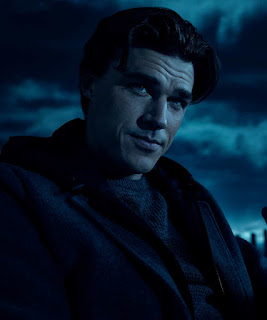