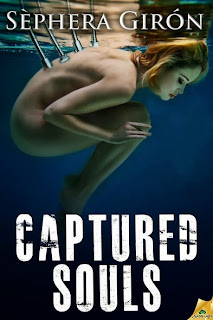 In February 2014, Captured Souls will be published by Samhain Publishing.

This book marks my official return to the horror genre and to writing in general.

The past few years have been a whirlwind, an emotional time that led me little brain space for original thought. I wrote a few stories and played with ebooks.

This is a story about a mad scientist at a university who uses grant money for nefarious experiments.

Our mad scientist, Dr. Miriam Frederick, keeps a diary about her diabolical deeds. She captures people who strike her fancy and attempts to program them to love and lust after only her.

A writer.
An athlete.
A beauty.

However, as it tends to happen, things don't go as our control freak scientist desires.

For a taste of what you might expect from Captured Souls, you can see me reading a passage at one of the Chizinepub Series.