Doctor Sleep: Part One by Sèphera Girón and John Palisano 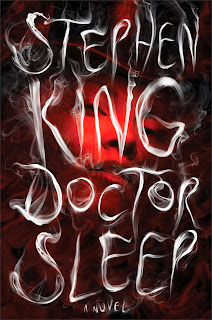 Doctor Sleep Sleep Part One
By Sèphera Girón and John Palisano
John Palisano and I have known each other for several years as horror authors and as chapter heads for the Horror Writers Association. He helps run the Los Angeles branch of HWA while I run the Toronto Branch.
A few weeks ago, we were talking about the new Stephen King book, Doctor Sleep. We were having so much fun, John had the idea to share our conversation. We were both reading at the same time, which was interesting. As we’re similar in some ways: both writers, both big Stephen King readers, we are also different. We’re a decade apart in age, and he lives on the other side of another country. I’m in Southern Ontario and he's in Southern California. We’re not sure how many posts it’s going to take for us to get through this. Maybe one? Maybe two or three more? We’ll have to see. So let’s get down to business, shall we? And feel free to comment!
J.P.: Hey. I don’t know about you but when I heard there was a sequel to The Shining I was nervous. Big Steve’s a very different writer than he was all those decades ago. I love his modern work, but it’s just that. Modern.

SG: I remember when I heard there was going to be a sequel to The Shining. It was on a rare occasion when Stephen King came to Toronto and doubly rare that I heard about it in advance and was able to buy a ticket to the event. He told us that night he was writing Dr. Sleep. He even read to us. I was having such a geek-gasm that I don’t remember much of the night except that there was going to be a sequel to The Shining. My brain has been screaming with anticipation about the sequel ever since. Yes, it’s been years. I may have missed several of King’s books in recent years, only because I’m a full time writer and editor and never get to read for FUN, but I made the full out effort to read Dr. Sleep. I had to. It’s in my DNA.

J.P.:I wasn’t sure what to expect when I read the description of the book. Danny as an older guy? Weird. No Overlook? No hedge animals? (they do make a cameo) How was this going to play out? What’d you think?

S.G.: I had no idea what to expect. I wondered what would happen to our Danny. Was he scarred for life from his Overlook adventure? Would he turn out to be a good guy or a bad guy or just some dude in an insane asylum? Does he still talk to his hand? Does he have nightmares about dear old dad? Will there be hedge animals? Will he be like Carrie and use his superpowers to manipulate the world around him?

J.P.: Right? Then the day came and I had it pre-ordered from Kindle and saw it download. And then I started reading it. Slowly. And I really didn’t like it. But I kept reading. I know myself. The first time I saw Fargo I didn’t like it. So many things, I didn’t like them at first, but I slowly warmed to them.

S.G. When the buzz came around that the book was coming out any minute, I was excited yet sad. I knew I’d have to stand around the bookstore reading it since buying a hardcover isn’t in the budget. But the universe smiled on me, and a colleague/fan sent me a brand new hardcover edition the day it came out! How cool and generous was THAT?

I hate the cover on the version I have. I’ve seen some better covers. But who cares about the cover. This is KING! My dude! My man! And THE SEQUEL!!!!!

J.P.: Yes, but this wasn’t what I was expecting. It wasn’t a Gothic ghost story. It wasn’t a continuation of the ghosts of the Overlook. Danny had grown into a real jerk. He didn’t do anything that I liked. He turned into a very selfish person. I didn’t like reading how sick he was. He was a drunk. A womanizer. A drifter. He didn’t seem to have much of a moral compass. What the hell? Wendy was dead. Dick Holleran was dead. This was a very lonely and depressing book.

S.G. I badly wanted a gothic ghost story. When I read The Shining, I was a teenager, in the seventies. I bought the book and sat in my room (in the basement) and refused to leave until I knew how it ended. I was too afraid to close the book. I was too afraid to stop reading as if something bad would happen to me if I did. I was terrified of the hedge animals. I read that book in two days. So when I started Dr. Sleep, I cried with joy at the moldy old lady and a hedge animal reference. When I buckled my seat belt, I thought I was going on the Haunted House ride. But then there was a turn. This wasn’t going to be my gothic ghost story. This wasn’t a haunting of ghosts, live or memorex. This was a modern day battle with alcohol. I didn’t want to read about it, alcoholism, there are too many people in my life who have it, who have impacted my own life in negative ways because of THEIR disease. But I soldiered on. After all, it’s Stevie…and Danny…and SOMETHING was going to happen!

J.P.: I almost stopped reading. But then something happened.
It hit me that what I was reading was a very realistic portrayal of someone deeply addicted to alcohol. Alcoholism runs in families. It made sense. This was Jack Torrance’s son. This is the side of Jack only glimpsed off in “The Shining” all those years ago. We were seeing it front and center inside Danny. But only Dan didn’t have a family. Times were different. People married earlier in Jack’s era. It was less common to be a single man.
So then I thought: this is brilliant, he’s really showing us the poison personality that took Jack down. Now we’re seeing it taking Dan down.

S.G. Danny on the benders felt so real, and I guess because it’s Stephen King’s battle too. And though I had the disappointment that this wasn’t The Shining Part Two, I accepted the turn in the road and endured Danny’s difficult and heartbreaking journey of drunk despair. I did feel ripped off that we didn’t spend more time with Wendy but hey, horror comes in all forms and the horror was, Wendy wasn’t who we thought she was and she didn’t have a starring role in Dr. Sleep. I read The Shining as a young virgin teenager. I read Dr. Sleep as the mother of two adult sons and the star of two magnificently horrible divorces. So I wondered how Wendy had aged, what kind of mother would she be in Dr. Sleep, but…well, that turned out to be a non-issue. King is a master manipulator even if you think he’s “lazy” “forgetful” or “contrary” with his treatment of Dr. Sleep. He didn’t give us Wendy not because he’s any of those things but because he’s a cruel bastard and a masterful storyteller. He gave us something NEW.

J.P.: There was enough along the way to hint that something else was coming. Something supernatural. And then the True Knot appeared. The group of roving, white trash-esque demons. The eaters of the steam. Steam stolen from those with The Shining. Kids. Babies. The True Knot are nasty evil things. Very reminiscent to me of Insomnia and Hearts in Atlantis. I started seeing connections to a lot of other of King’s stories and novels. Not direct references, like when he sets all the stories in the same town of Castle rock, but in that there’s something else working together to do very bad things. From then on it was hard for me to put it down.

S.G.: Seriously? I thought, okay. Here’s where the connections are going to happen. Here’s where King is going to take us on a journey that we didn’t expect, after all, that’s what he does. Why WOULD he write The Shining Part Two?!? He’s Stephen-Fucking-King and he’s going to put loop-de-loups on the roller coaster that we won’t expect. And he did.

J.P.: I know! And then it was like seeing the gears working behind the scenes of all these horrible things that have happened in King stories over the decades. It seems that they were being tied together somehow. And then I fell in love with Dr. Sleep. It got under my skin in a way few new novels have been able to do.
What was that first third of the book like for you? Did you have the same kind of feelings or were you swept away right in the beginning?
The writing style is also remarkably different than The Shining. What did you think of all the nods to the original book? The woman in the room? The hedge animals. The Overlook burning down and still haunting Dannie?

S.G.: The writing style is different, definitely. I’ve not read The Shining in over twenty years. I re-read it in University and now and again, glance through bits of it. I love the nods in Dr. Sleep to The Shining. In that first third of the book, it was that jagged nerve-wracking click-click-click up the first hill of the roller coaster…I get impatient with set-ups but I know how King works and you don’t want to miss a word of set-up because he will give us the pay-off at some point…or so the theory goes…
So by the first third of the book, I had my own whirlwind of emotions. Excitement, disappointment, intrigue…and that’s enough for me to keep turning the pages…

Http://www.johnpalisano.wordpress.com
Check Out “Doctor Sleep” here!
Posted by sephera at 10:36