While I was walking today, I had deep thoughts about American Horror Story:Freakshow that I binge-watched last night. If you've been following my blog, you know I started watching this season late, the episode when Twisty was led away by the Halloween spirit. My thoughts are many and I don't have a lot of time to ponder in my blog, as tomorrow begins my back-to-work writing and editing life! However, like millions of others, I've been fascinated and repelled by the storyline concerning Dandy and his evolution from spoiled mama's boy to serial killer. This blog isn't really about that either.

Psychopaths Entertain Us!
I could likely write several non-fiction books about the power of the real-life psychopath and how normal folk are drawn to their dark, dangerous ways, however, I'm sticking to fiction. And even then, I'm just having a few scattered Sunday thoughts.

Some iconic psychopaths have a lot in common in how they've been portrayed in film and television. They are often good-looking or unique-looking, have a hang-up or obsession, and inevitably have scenes that exposes their human-like vulnerability.  Although psychopaths themselves have no empathy, the average viewer has empathy for them and this is the key to how we love and hate these psychopaths. We see how they are "misunderstood" as we are privvy to their behind-the-scenes madness. This makes them human to us, and we root for them even though we know we shouldn't.

Psychopath Rituals
We get hooked in by scenes such as Eric Roberts in Star 80 working out and self-talking in the mirror for confidence. On my first viewing of this movie, at the Toronto Festival of Festivals (our film prof recommended we score tickets, if possible, so I did) this was one of the scenes that creeped me out the most. If you've ever seen All That Jazz, you'll recognize that Fosse used this idea though with another kind of narcissist. Jessica Lange is in All That Jazz, one of my favorite musicals.

Real-life narcissists and psychopaths have to self-talk as well to get through their daily routines of deception and maintaining the illusion that they are human.

Many psychos are insecure despite their immense narcissism.

In American Horror Story: Freakshow, we were treated to a montage of Dandy working out and losing his mind. Nice work, Finn Wittrock!

They also spend a lot of time in bed or on couches, thinking, obsessing over their idols and hobbies, and playing with themselves.

They love to dress up for their nefarious deeds and may even wear a mask now and again as they clown around.

Though sometimes they can freak out their friends with their enthusiasm.

Which can lead to bad things happening. 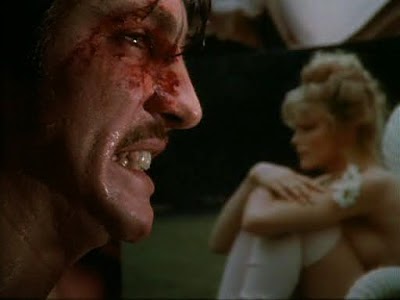 Sometimes there's a mom ready to wipe up the psychopath's mess.

Of course, where would we be without the original movie, Psycho and the modern series, Bates Motel and those twisted mother and son stories?

Bates Motel finally starts up again very soon. I can't wait to see what's next in this sick soap opera!

And since the big wigs in television land know that we are used to seeing our bad boys running around in tightie-whities, they've thrown in some big brother eye-candy for good measure. Norman's older brother, Dylan is essentially a good guy but has enough bad boy for us to love him.

I think that the lobster hands we saw in the jar were from one of Jimmy's relatives. Lord knows they've mentioned them enough over the past few months.

Like I said, these were a few of the thoughts that tumbled around my head this Sunday afternoon in January. I'm already thinking of more to add and maybe I'll have a Psychopath Sunday every week.  Remember, truth is often stranger than fiction. Watch out for the psychopaths in your own life!

Feel free to add your thoughts about psychopaths and American Horror Story: Freakshow.