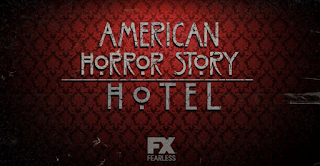 I waited all summer, partly with eager anticipation, partly with dread that I’d be bitterly disappointed. But now it’s here and I’ve seen both episodes.

American Horror Story: Hotel is gorgeous to look at. Each scene is a feast for the eyes from shadowed hallways to luscious sets to glamorous costumes. As always, the make-up is perfect if overdone, and hair is always amazing, every strand artfully placed.

As I’ve opined before, I’ve fallen into the worlds of AHS knowing they will be flawed, that I won’t be completely satisfied, that I’ll have to wait through less engaging storylines to get to my favourites but that’s how it is with any show. No one is going to create your exact perfect show and I gave up long ago thoughts about flowing storylines that arc and end. Some do. Some don’t. Such is the Winchester House that is the American Horror Story series.

I was hoping Hotel wouldn’t be just another haunted house show but I knew it would be a combination of several tropes as that’s how it rolls in Murphy’s worlds.

There are several themes happening here as always. The main question is do I like it?

On many levels, I love it.

On a couple of levels, I’m not in love. 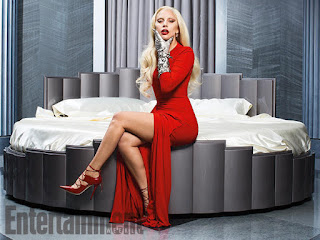 Things I Like
I love Lady Gaga as an entertainer so was curious to see how she’d fare on this horror show. She’s fine as a Bathory vampire assembling her minions and little monsters. I have no issues with her acting or character. Her scenes with Matt Bomer are hot, her scenes with Finn Wittrock are hot, her scenes with everyone are hot. She doesn’t overplay the “smoldering looks” or even her dialogue. I rather like her understated blank vampire. She’s not falling into playing a typical vamp which would be easy to do.

I liked how the Countess threw away her lover without a thought. That’s a real vampire! Good stuff! Also, she already told us that she doesn’t want to fall in love, and so, despite her feelings, she moved on to the pretty model junkie. After she turns Tristan, she tells him (Finn Wittrock) that they have immortality but to keep it they have to be smart. Since Tristan isn’t the brightest bulb on the tree, we know he’s going to have something gruesome happen to him, and likely by the hands of Bomer. Also it’s likely to occur within a couple of episodes since Wittrock said in interviews before this season that he doesn’t want to do a full season because of other commitments.

I like the idea of Iris (Kathy Bates) being one of the only real humans in the place because she wants to be close to her son. 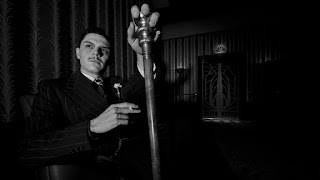 Evan Peters blew my mind. He’s playing  the sadistic serial killer magnate who built the hotel. He’s based on real life Chicago serial killer who built a hotel specifically designed to torture, rape, and murder people and to hide the bodies. When we first meet Peters, I didn’t even recognize him. He looked older, his acting was impeccable, he was fantastic as a fifties type character. I hope he doesn’t lose the intensity he had in this episode as the series moves along. I’ve never seen him act so well. His talents were wasted completely in Freak Show. All he did was drink, cry, fuck, and get angry, lobster hands or not. He was wasted in Coven. His Frankenteen character could have been so interesting but they threw him away as a sex toy. So here’s hoping that he continues to rule the hotel with a tight murderous fist and doesn’t lose his accent or his little pencil thin moustache. Didn’t Walt Disney have one of those?

I like the ideas of vampires and ghosts and who knows what else as well as humans living in this hotel.

I was happy they played Hotel California in the first episode since we all knew they would play it at some point, so it was good to get it done. I love that song however it’s such an obvious choice.

All the music is great and really suits the story. Murphy does have a knack for matching music to story. Even if the music is horrible (like some of those AHS singing numbers), it always fits. 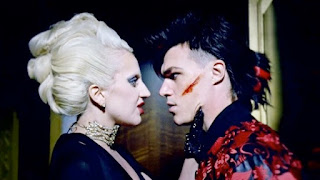 Things That Bug Me
Well, it’s always easier to complain about things, so here we go.

My biggest plot hole complaint is the Wi-Fi situation. Iris told the Swedish girls that the hotel is a black hole for technology, cell phones don’t work, and there’s no Wi-Fi. There are landlines in the rooms.

So, was she lying to the girls? Did they turn off the internet when they were there? How did they block the cell phones from the satellites? Did the ghosts block the phones?

In episode two, Tristan sits in the lobby flipping through grindr on his cell phone. He hooks up with a guy within minutes from the comfort of his couch. Why does the Wi-Fi work for him? Because he’s a vampire? That makes no sense.

Speaking of cell phones, Scarlet takes a selfie with her brother in the kid room and it looks like she used a cell phone. If she had a cell phone, why didn’t her parents call or text her? I don’t recall her ever checking her phone unless I was looking away.  If Tristan hadn’t been using his phone, I wouldn’t have noticed her phone situation. But it bugged me that his phone works and hers doesn’t.  Because she’s human? How about all the travel time away from the hotel? Wouldn’t her phone work then? If her parents are so worried, why didn’t anyone call her or track her phone? Dad IS a cop!
How come none of the cops saw her on the buses or walking home if they’re supposed to be guarding her? Wouldn’t they think to check the hotel since she’d been there before and had made a new friend?

Why did dad dismiss Scarlet’s story so quickly? He saw Holden in the hallways so why wouldn’t he believe that she did as well? Is he pretending to not believe her so that he can investigate by himself? There are so many piddly plot holes in the cop story that may or may  not ever get filled.

When Scarlet speaks to Holden for the first time, the words, the acting, the entire shebang was so ridiculous that I could barely watch it. No children would act like those two did. GAH!

Chloe Sevigny is underused again. She is such an intriguing gorgeous weird actress and perfect for horror movies.  I don’t really like her acting, I always feel like she’s “acting” but I could watch her do anything for hours. That said, her role sucks. I hope she gets to break out into being a lusty vampire or something as the series moves along. Right now, she’s a whiney baby and I hate that character. I will give big points for the measles spiel to the anti-vaxxer. It was appropriate to the plot, a parallel of mothers who think they’ve done right by their sons and yet in the end, failed them. This also echoes Iris' plot line as well as she tries to be close to her dead junkie son.

Finn Wittrock’s casting is disappointing. I’m sure it’s not much of a stretch for him to play a coked up pretty boy model turned vampire sex toy. Of course, there’s hope that he’ll reveal he’s actually an evil master manipulator from another vampire nest or something else trying to infiltrate the Cortez, but I doubt it.  He did a great job in Freak Show and should have a more complex character to play. Well, maybe he will be revealed to be something completely different.  You never know with American Horror Story. In the meantime, I’m not complaining one bit about all those sex scenes. 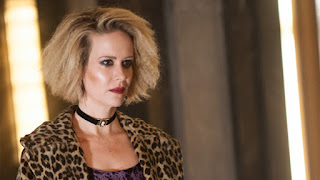 I don’t like the crying heroin chain-smoking junkie Nancy Spungen ghost. Yes I get she’s the addiction ghost, she likes to watch them die, she’s always sad so she cries and moans, she lures other addicts to their deaths. I get it all, but I don’t like her character. Perhaps it’s how Sara Paulson plays her or the direction or the script, I’m not sure. I don't like how she smokes, it doesn't feel real. Too much smoking that is smashing us on the head with the addictions theme. She gets on my nerves and I hope she gets more monstrous and less weepy as the series goes on. The only truly "horror" part of the show was when she scared Scarlet but otherwise, she just cries and smokes. Of course, there always has to be a weepy ghost in a haunted house so her character is not likely to change.


At any rate, overall I'm enjoying Hotel and I'm excited to see what's going to happen next! 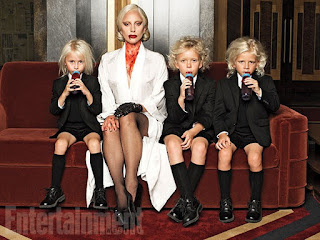