You KNOW there will be SPOILERS!!!!! 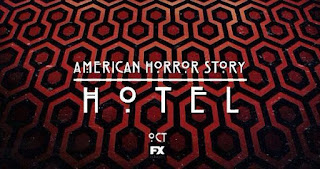 Last night I watched two episodes of American Horror Story: Hotel as I had missed it last week due to being in the most terrifying haunted house I've ever experienced. It's in Denver Colorado and called The 13th Floor. Check it out if you get a chance or rather, if you dare! 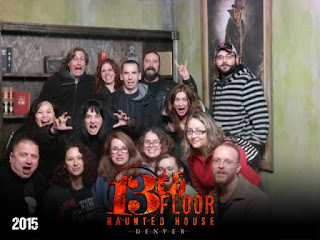 I love it when I have to watch two or three episodes of a show at a time. I can become more immersed that way. But it also means I often don't realize where one episode ends and the other begins. 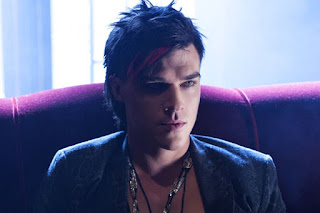 Lucky for me, episode three began with Finn Wittrock so I was able to remember that much of the order of the stories. 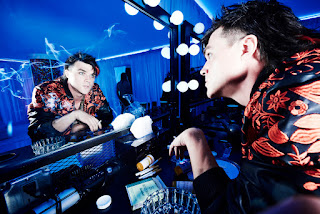 We might as well discuss Mr. Wittrock first as there's not much to really say. He plays petulant model turned "vampire" Tristan Duffy and after last night's viewing, is vying to become apprentice serial killer to Evan Peters' Mr. March. The apprenticeship serial killer idea totally echoes/copies  Dandy learning from Twisty in Freakshow. However, whereas Dandy is a highly intelligent gaslighting master manipulating sociopath, Tristan is a dumb druggie model manipulating boy toy, or at least appears to be, so far. That being said, Tristan is naked a lot and I have zero complaints about that nor about the hot man on man action. Tristan isn't going to last in this story. His pretty looks won't get him very far in this den of undead and he doesn't have much else going for him. However, he does have some great one-liners, much as Dandy did, so that's a great plus. I think it would be cool if Jeffrey Dahmer pours acid into his brain and eats him but I doubt they'll kill him like that. 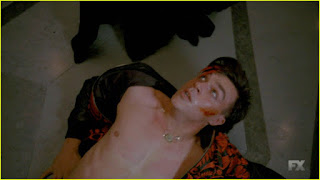 Kathy Bates character echoes the mother motifs of a mom who wasn't there like Chloe and the maid. The Countess likely has child issues as well since she steals other women's children. 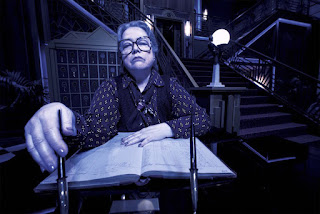 I had a brief thought last night that the major serial killer is Sister Mary Agnes from Asylum and Freakshow even though Lily Rabe is playing Aileen Wournos this week. Doesn't mean that the nun couldn't be behind this. However, I'm leaning toward the detective himself. Actually there are a couple of other characters it could be as well.

The serial killer dinner was fun but I'm not sure if it was a waste of time or a progression. On Twitter, many people are calling John Lowe (Wes Bently) the stupidest cop in the world, and he sure is. I keep waiting for him to break out a Spiderman outfit as he looks like Toby McGuire to me. I hate his character, almost as much as I hate crying chain-smoking heroin addicted demon ghost Sally. This is one dumb cop. He loses his own kid. He doesn't seem to think there's anything fucked up about this hotel. He somehow doesn't believe his own kid when she sees Holden yet he saw him himself. His return to alcohol makes zero sense just because one person said one thing once over the past few years. He passes out way too fast from the absinthe, he should be hallucinating pleasantly at first. He hardly had any, it doesn't work like that.

At any rate, Lowe is nice to look at, as all the AHS men are, but man his character is boring. People have pointed out in other reviews about how most of the men look the same, and they do. They all are beautiful and interchangeable except Evan Peters.

Peters is still holding his character which is great. Hopefully there will be more to come besides hosting a dinner party with serial killers who torture and eat people at the dinner table while a "good guy" watches. 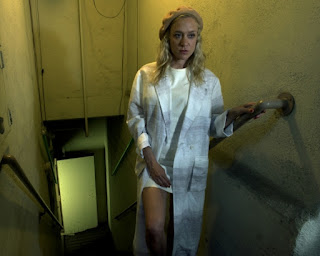 Chloe Sevigny continues to be a not great actress but fascinating to watch. Thank god she's going to stop being a dowdy downer mom and now will hopefully get her groove on as minion to the Countess. She was totally unbelievable as a cold doctor mom who doesn't notice her kid is cold and barely reacts when he eats the family dog. Even if she's in shock that he's alive, she should have more reactions to the horrors of her own son. Boy oh boy.

I was excited to read about how Chloe is involved with a new Lizzie Borden movie. I saw a picture of her visiting the Lizzie Borden Bed and Breakfast many years ago when MySpace existed. I always hoped she'd do something and now she is! I can't wait to see how it goes.

So, I'm still checked in at the Cortez, waiting to see what debauchery is occurring next. I don't find this story scary at all but perhaps I'm just jaded when it comes to haunted things. That being said, I did jump a couple of times at recent movies so I can still be scared. However, this show does deliver on eye candy, gore, and twisted morals. It's keeping me on my toes for now as the initial story unfolds..

What do YOU think about this season? Who do you think is the serial killer? Who is your favourite character?