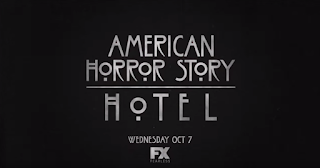 Another episode will soon be upon us.

Reviews about last week's episode seem to vary between "eh" to "the best thing ever."

Personally, I found it slow. I guess I got used to all the blood and mayhem and sex and though this episode, Room Service, certainly was gory, it wasn't exciting for me.

However, here we are.

How are the writers going to deal with all of that?

Then there are the most selfish parents in the world.

Ms. Doctor who gives the dying measles child the not-vampire blood which causes him to become a blood-sucking freak but does she even go to check on her daughter? She's so enamoured with her son and meddling with playing God that she forgets about her kid. If she connected with Miss Scarlett, we don't know.

And then there's dear old dad, who's too busy having a nervous breakdown or something to remember he has a daughter. He'd rather dwell on himself and his dead or not dead kid than worry about a girl with a depressed mom and loony tunes dad.

That cop detective storyline is getting so boring. We got he was descending into madness from day one. So now what? No surprise he lost his wife and job. Hurry up and do something already. Is he the serial killer? Is that why he was at the dinner party?

We got hammered home with more mother stuff, and weird mom and son connections.

We didn't get to see Finn Wittrock naked but briefly saw him a la Gary Oldman in Dracula on the arm of Lady Gaga as they sniffed Kathy Bates because she smells different.

We learn about Elizabeth Taylor's transformation and that she's not dead nor a not-vampire but actually someone who works at the Cortez on her own free will. Mostly because she can cross-dress without having to kill anyone over it. A segment was devoted to the back story about how a simple salesman from Kansas got swept up in the Countess' tornado and became a permanent living employee of the hotel. Oh, and Liz likes girls. Perhaps something will happen between Liz and Iris.

I wonder if Lady Gaga will be happy or angry that Chloe turned that kid who turned a whole bunch of kids?

Lady Gaga made it pretty clear that Chloe is expected to keep the rules so there is likely some kind of consequence to her action.

Iris was torturing tourists in the early episodes to provide blood for the children  yet it seemed like she had no clue what was going on with regard to the Hotel's dark secrets in this episode. There was odd character stuff this week for her.

Well, hopefully next week will be a kaleidoscope of mayhem. Two weeks of exposition is enough for me!

What do you think about American Horror Story: Hotel so far?