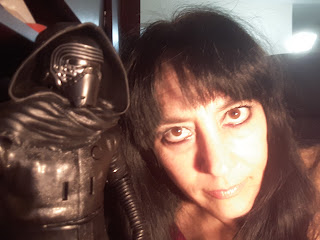 It does tickle me on some level and so I thought I'd share what other fans of these actors have also likely figured out.

As followers of my blog know, I took great delight in the Dandy thread on American Horror Story: Freakshow. Dandy was my new favourite obsession for a while there.

Then Dandy was gone.

Now, Kylo Ren from Star Wars: The Force Awakens has tickled my psychopath bone as we can see from my growing toy collection and daily Instagrams.

Scorpio
So like any fan, I long ago checked out a bit about actors Finn Wittrock and Adam Driver and find it amusing that they are both Scorpios close in age and both recently married their sweethearts from when they attended Julliard.

It's interesting that these young Scorpio actors scored iconic roles and also married their sweethearts and all four attended Julliard. The two Scorpios brought great acting work to what could have been really cheesy roles for either one. But they both brought a depth and compassion to their psychopaths that keeps/kept the audience engaged and sympathetic to the story.

I don't know what it means, if anything, It's just one of those things that makes me go, "Hum."

Aquarius
I also managed to figure out the volatile nature of Emma Roberts and Evans Peters relationship and why they keep reconnecting though anyone can see they aren't good for each other.

They are both Aquarians. As an Aquarian myself, I will vouch for the fact that Aquarians have a mean streak. It's usually with our sarcastic tongue. There's a reason this air sign is signified by the suit of swords in the tarot deck. We're the kindest, nicest people in the world until you cross us. Then it's all over. Roberts and Peters keep going back and forth despite domestic violence issues. They are still young and need to realize they can and should move on from each other. Of course, it doesn't help that they are always working together or near each other, that their worlds are always touching, so I can see how they want to ride that "famous couple" wave while it lasts as well. Absolutely. I hope they can work through their issues as they mature. We'll see.

That also explains why they are so compelling to watch even when their acting may not be at its strongest. Peters blew it out of the water this year as psychopath Mr. March in American Horror Story: Hotel. I give him 100 stars for his role and he kept continuity throughout the entire series. A great feat in what is an uneven show.

I'd like to see Emma Roberts back on American Horror Story as a bitch actress/model/rich girl like she was on Coven. Something where she can be mean and cold and doesn't have to act much. Some kind of serial killer would be good.

At any rate, it's fun to see how star signs and celebrities may or may not have patterns.

Do you find any similarities in celebrities or characters?