Rogue One: A Star Wars Story Thoughts and Spoileramas!

Or go rogue and read on! 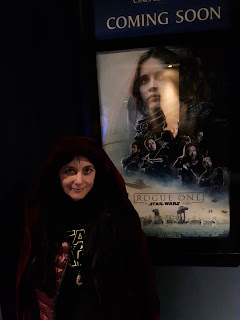 We were pretty excited! Well, okay, I was. Dorian is a good sport!

Oh, what a day it had been. Toronto had been slammed with a blizzard. I was supposed to work at the college for evening exams and they were canceled. They should have kept the school open since the snow stopped pretty much when I was nearing the college and most people had already arrived anyway. It's a difficult call for sure. I'm glad I didn't have to make the decision. But it was another hour and a half home in icy blizzard rush hour hell. I kept pretending I was in a Tie or X-wing fighter so I wouldn't have to worry about black ice. Since I'd pre-bought the ticket, there was no escape. I got my nerves calmed for an hour or so and then it was time to go see the movie. I picked up Dorian and we drove the hair-raising ice rink bridge (used in many big budget pictures that film around town) to the theater that wasn't very far or we wouldn't have gone. It's just that hell-bridge over the Gardner. Yikes. 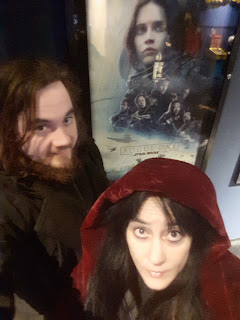 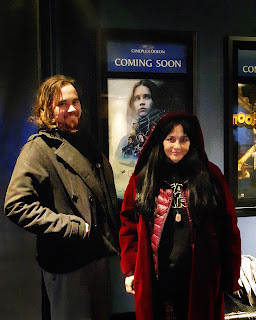 If you've not seen the movie yet, don't read on. I'm not giving a blow-by-blow by any means, but I will reveal plot points that will spoil the movie for you.

I enjoyed the hell out of the movie, yes. I'm a bit loathe to really review it as I need to see it another time to catch more of the story and dialogue. When I see movies in 3D with AVX sound, I am lost in the spectacle and sensation. We were near the D-box chairs and sometimes, especially near the end, we enjoyed the vibrations of ships hurtling around and bombs dropping. When I'm enjoying an amusement park ride, I lose track of the details required to share in review until I see it again with more focus.

Visuals
The visuals of this movie were stunning. They were all I hoped it would be. Of course, the odd scene had flaws, like the 3D or CGI didn't quite work, but holy shit, who cares?! I remember Star Wars when it was Star Wars, no 3D, and THX was invented for it. The experience was amazing, that crawl for the first time was overwhelming. Of course, you've heard that a zillion times from those of us who were teens when it came out.

Rogue One captured a lot of that awe, or at least, my own fifteen-year-old awe and I'm sure that's what a lot of the reshooting was about over the summer. I don't doubt they added tons more fighting stuff, amazing special effects, as it's a spectacle where every inch of frame is used and things happen quickly, most of the time.

Expectations Checklist
My head space when I entered the theater was that this was the story of how the plans for the Death Star made their way to Princess Leia, that Darth Vader was in some of it, there was a new robot, that it would be really fucking cool. I wondered if Jyn was related to Leia or what her role was besides the one leading the gang of whoever to get the plans. Would we get to see Leia as the Princess of Alderaan and a bit of what she did and how she put the message into R2D2 for ObiWan? So many questions. There were a couple of scenes from the trailers that I was really looking forward to seeing.

I didn't expect any familiar characters except for a couple of cameos. I had heard that John Williams did NOT write the score so wasn't expecting to hear the iconic music.

Music
I was jarred when the familiar "A long..." line came on screen in the old-fashioned way. Of course, we're all trained for the blast of the iconic Star Wars theme to follow. But it doesn't come. It's like an irritating itch because it never comes. Those of us who have been fans since the seventies have associated those words with that sound for forty years!

I guess I'm saying, it was jarring to have the words and not the music. I wasn't expecting the words so wouldn't have missed them as I knew this was a different story. But they had the words and then a totally different score which I had been expecting but now was startled because of the "A long time..." title card. There was no crawl and that was fine.

The score was fine. There were moments that our familiar themes were heard but they were more of a tease and I'm not sure they worked. Williams was a master at putting specific themes in to tell the story and as foreshadowing etc. when you pay attention. I'll have to get more familiar with this score but like I said, it was fine.

Planet Hopping
In the first few minutes of the movies, there is planet hopping all over the place. I still don't know what was what, and like I said, I'll have to see it again to get it all straight.

However, it disturbed me. I didn't like all that hopping around. It felt like going through the shuffle of a video game menu deciding which level to play. It didn't engage me into a story.

Jyn
I'm not sure what happened to Jyn. I mean, I get what we saw in the movie. Her life story was choppily revealed. I'm not sure we needed it. After all, we didn't need Rey's and we bonded with her fine. However, I'm not sure what I didn't get about Jyn. Felicity Jones was great. She looks great and acts well but her character was horribly flat. I know she's a depressed goth girl with a murdered mom and kidnapped dad but she was still very flat. Part of it was the script. I suspect that she had a much larger role before the reshoot. I suspect the story was altered in a few ways as the new special effects were inserted. I know for a fact that some of the scenes I had looked forward to in the long ago trailers were not in the movie because I was waiting for them.

Sadly, I couldn't connect to Jyn, so once again I was hanging in to see how they would handle Leis and if Jyn and Leia would meet and who would play Leia? I hoped it would be Billie Lourd, But it never happened.

Leia
We briefly see Leia at the very end. This wasn't the story I was looking for. It was weird, cool,  and jarring to see fresh-faced CARRIE FISHER for a couple of seconds.

Darth Vader
I wanted even more Darth but he kicked some great ass at the end! I was angry they gave him a "punch line" before he killed someone, a la Freddy Krueger. Darth is not a wise-cracking villain. He's evil and scary. He doesn't do jokes.

Robots
I really liked the new robot. Of course, he was just filling the comic relief C3P0 role. Our buddies, R2D2 and C3P0 were only in for a second. I thought they would have more as their roles are kind of different in a New Hope. I wanted to see more about getting the plans into R2 and Tatooine etc. But it wasn't the story I thought it would be.

The Trailers Lied
I saw some of the early trailers. I tried not to see the trailers but I think I saw them all. It was because of some shots and lines in the trailer that I was excited for the movie and expected it to be a bit different of a story than it was. I guess that was partly because of the reshoots and rewriting they did at the last minute. Too bad.

Star Wars Isn't For Kids
I was a teenager when I saw the first Star Wars. It was dark and scary and had moments of fun and funny. Darth Vader was terrifying. Obi Wan Kenobi dies early in the movie and it's very traumatic for the audience and Luke. Han shot Greedo, not first, he just plain out shot him.

I've bitched on this blog before about how I'm not sure how I feel about children celebrating Darth Vader and Kylo Ren. Mass murderers who will take you out with a saber. Darth tried to kill his own children repeatedly and amputated his son's hand. Kylo stuck a saber through his dad for no real reason except to prove he's a bad ass when he likely isn't.

So, with all those horrors in mind, Rogue One is right up there with dark, scary, depressing war reality.

I wouldn't take the kids to Rogue One. In my head, before I went, I wondered if the new characters would all die. And as you know, yes, yes they did. And it was very sad.

When the movie was over, I sat in the theater, stunned by the last fifteen minutes of insane action. And then I cried for the heroes who were never recognized, ever. Just like many real life war heroes.

Rogue One
Great movie! Don't take your sensitive children! The characters were forgettable. I liked the blind Force user, I thought that was a great part. Even though there were many interesting characters, somehow we never really bond with them or care too much. It's too bad. I'm not sure what happened with regard to that but that's how I felt when the credits rolled and that's what I see a lot of other reviewers saying as well!

I'll see it again at some point and write more thoughts.


What did YOU think? Share your thoughts in the comments section!