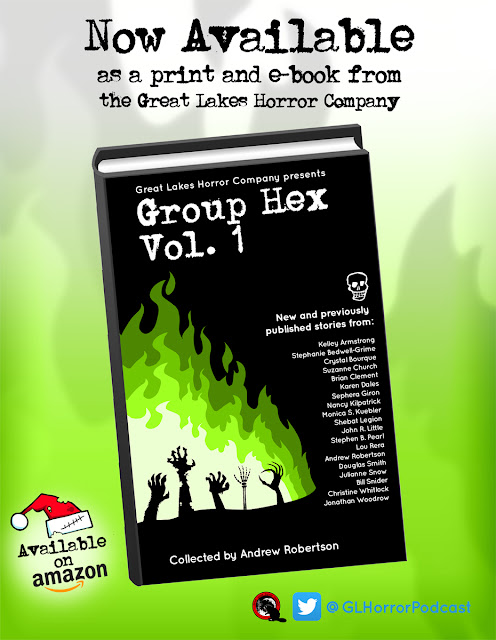 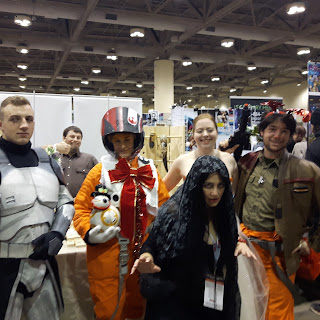 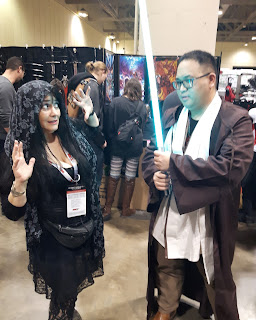 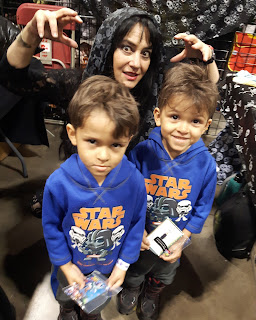 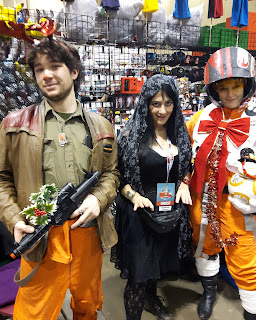 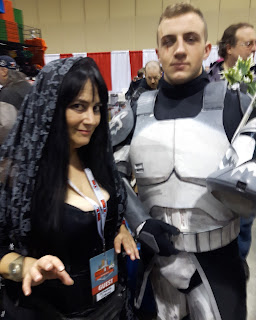 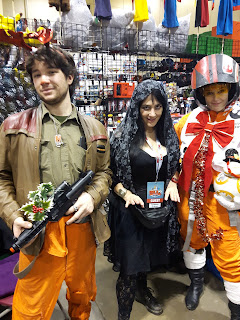 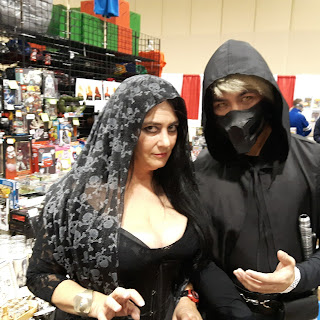 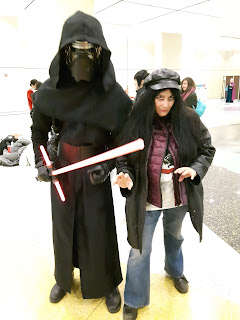 Sometimes, ahem, most of the time, camera phones take sucky pictures. This is actually a tall and very well put together Kylo Ren. He was a real sweetie under the mask as well. I would have talked longer to him but my parking was expiring and I had to get all the Horror Writers Association booth crap to the car before it turned over another ten bucks. I didn't even show him my Kylo Ren watch or the little Kylo I keep in my purse.

There were no Kylo Rens coming through the dealer's room. There were a couple of people who I thought might be Kylo Ren but also could have been any number of black hooded characters with a saber. I know a lot of video game and comic book characters but certainly not all of them. There were a couple of lady Kylos but they never came by my actual booth. One was really cool and I should have taken her picture. She had black Rey hair, black Rey outfit, Kylo scar across face, and red saber. I liked that interpretation of characters. I also thought I saw, before the show began, the lady Kylo Ren who is in a picture on another post in this blog but she never came into the dealer's room. I began to realize that a lot of cosplayers weren't going into the dealer's room around two or three o'clock but it was a very long hike to go watch them all posing for photos and playing on the different floor levels, looking for my Kylo Ren and I needed to be near the booth! Surely there was a tall, adult Kylo Ren cosplayer who would like to play with me somewhere at this entire convention of cosplayers?!

I had given up hope of getting a Kylo Ren picture this time, and I have gotten some good ones ever since The Force Awakens came out only one year ago. But alas, there would be none today and it made me sad. Then I saw this young man on another floor when I was on the way out and back in my street clothes and just flat out asked him if he'd pose with me.

It was nice of this young man to pose with me. I wished there had been someone to take our picture properly and I would have done way more poses. However, random stranger that I nabbed to click didn't seem too enthusiastic so that was that though I'm very appreciative of his effort. I'm very grateful to  both random strangers for indulging my Kylo fetish. Anyway, this Kylo Ren in the picture is going to Rogue One on Thursday so have a good time, "Kylo" if you see this! I'm going to Rogue One on Thursday as well, but not at the same theatre. I'm sure he's relieved about that! ha! 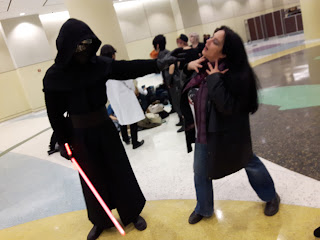 I guess once Rogue One comes out, there will be more Darth Vaders and even less Kylo Rens plus lots of new characters at next year's events. But in the meantime, I'm happy I got some Kylo pics!