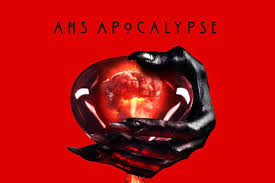 A couple of nights ago, American Horror Story: Apocalypse premiered. I was excited for the season to finally begin but was also very cautious about falling in love too fast and getting my heart shattered into a million pieces later on. So I'm trying to rein my enthusiasm to protect myself from inevitable disappointment.

There will be spoilers in here, but I’ll try to dance around a bit.

First of all, I really enjoyed it but of course, I’m a disaster movie lover from way back. So the impending apocalypse as reported by cell phone alerts and all the drama associated with the last minutes before a bomb hits worked for me. There was the scrambling for safe zones, the destruction of the innocence, the entitled rich people finding a way, or at least, most of them.

We met a few characters, but we can’t count on any of them sticking around for long or maybe a couple will ride out the season. Who knows? It’s American Horror Story, the show about diversion and killing off your favourite storylines. My bets are on Joan Collins and Sarah Paulson lasting until the last episode and then turning on each other in a cunning act of triple cross betrayal. Of course, it might boil down to Jessica Lange against Joan Collins.

I’m not enough of an AHS nerd to recognize all the motifs threading back to other seasons but I did spot a few. And there will be more obvious ones, I’m sure, when the Coven arrives, or maybe they are another Outpost or however they are going to portray the NOLA witches. 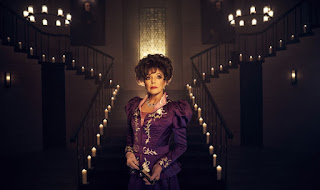 Plot Stuff
The premise is that some nuclear bombs were dropped and the world as we know it is finished.

Some people were lucky enough to be in airplanes when the actual bomb hit so were spared the explosion.

There were others in various scenarios.

Ultimately, we’re following the tale of a group of survivors in a bomb shelter called “Outpost 3.”  It used to be a boy’s school. (Like Hogwarts?)

There’s a perceived hierarchy that could be a house of lies.

There are “purples” and “greys” which Is reminiscent of UFO-speak. There have been aliens and UFOs in AHS before.

Some we know are there because they have a special genetic situation that is mysterious for now. I suspect aliens.

Most people are there because they paid millions however it seems more like a jail where everyone Is trapped. Which they are.

There are other “Outposts.”

Characters
Sarah Paulson started her role strong, in fact, I didn’t recognize her at first, then she slowly slid back into Sarah Paulson playing a character. Sigh. At least she wasn’t sobbing and screaming this time.

Kathy Bates character is totally cool and reminiscent of Madame LaRue and The Butcher and is no doubt related to both.

Evan Peters is always a delight. I’ve loved watching him grow up, and still wish they had done more with him when he was a teenage Frankenstein monster. I hate his hair. I’m sure there’s a reason, he’s had that colour hair a few times, Andy Warhol comes to mind. However, he’s playing a hairdresser so did he have tons of bleach, like years worth to keep his hair that white? Oh, the questions already!

And he’s the hairdresser to a rich bitch whose hair seems to go to hell as the show goes on or rather just gets weirder as does Lourd’s so why isn’t he still styling it or is he over styling it on purpose?

I was pleased to see Billy Lourd still sporting ridiculous hairdos, as has been her tradition since Scream Queens, in homage to her deceased mom and Princess Leia. 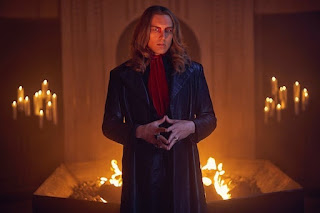 Cody Fern is in there looking like the Vampire Lestat and maybe he is. He’s the grown-up baby from Murder House, the “Rosemary’s Baby, baby” I believe. It’s only the first episode. I fell in love with Cody Fern like the rest of you did during his heart-breaking stint on The Assassination of Gianni Versace. Oh, boy, that man can act. And he’s very nice on the eyes, oh yeah!

Speaking of nice on the eyes, I hope Finn Wittrock shows up, AS DANDY!!!!!!!, and surprises us. I’ve not heard he’s coming back. Maybe the witches will Ouija board him back to life to get at his fortune and use him as a tool for some bad shit! Isn’t Madison his heir? I can’t wait for Emma Roberts as nastyass bitch Madison to return. She would totally Ouiji board him to get at some secret money or whatever. He can follow her around as a Force Ghost in his tidy whities, whining and bitching and slaughtering. Ha!

Music
The song, “Calling Occupants” was playing on an endless loop. I love that song. It was huge on the radio when I was a teen by a band called Klaatu. I had all their albums. They were concept albums and “Calling Occupants” is on the 3:47 EST. I used to listen to Klaatu for hours on end back in the day. I dreamed of spaceships and other planets.

When Klaatu was first heard on the radio, people thought they were the Beatles. When I was around twenty, I saw them in London, Ontario at a mid-sized bar. It was so very cool. Since I loved the albums so much, I had a brief by letter correspondence with Terry Draper who had actually talked to me after the show which nearly gave me a heart attack!

It’s hard to believe that a Canadian band created “Calling Occupants” which Karen Carpenter heard and covered a year or so later!

So it was cool to hear that song on AHS the other night. Definitely telling us there’s a spaceship, that there are aliens and so on.

Are there clues in the music? Do the songs play forever because they weren’t getting the message. “Calling Occupants” finally changed to “Morning After” but then they didn’t get it to change again.

Conclusion
You can see how I was trying not to give spoilers. I am engaged in the story. There’s no real character who interests me or want to follow except Michael Landon who is played by Cody Fern so far. We’ll see. Hopefully is will continue to be quirky, engaging, funny, grim, and won’t fall off the tracks!

We're Off You Know

The Loneliest of Creatures

Did you like the first episode of the new season?

Where do you think Apocalypse is going to go, storywise?


In the meantime, you can catch me on Twitch for Lunch Time Tarot Card Readings!

This week, the time might be moved to mid-afternoon as I might have to work over the lunch hour every day. The best way to find out is to follow me on Twitch, I'm Sephera666 and you'll get dinged when I come on. I give everyone a one card reading and we also talk about all kinds of things. Maybe we'll talk about AHS this week! It's up to you!
Posted by sephera at 00:50