In the 1975 movie Lisztomania starring Roger Daltrey as Franz Liszt and Veronica Quilligan as his daughter Cosima, Franz has a similar issue that Harry (Finn Wittrock) in Red Tide does. He has a daughter who is an amazing violinist but who hates him and wants to kill him.

In fact, a lot of the themes in these two shows are quite similar.

Cosima has a voodoo doll of daddy and is running off with bad boy Wagner who in this twisted fever dream is a Nazi. In fact, a Super Man named Thor is created as a superweapon for the Nazis but that's only one tiny bit of weirdness that permeates Lisztomania.

The movie talks a lot about selling your soul to the devil for fame and fortune. Another Faustian story.

At the time, this crazy movie had a star-studded cast including Ringo Starr and Rick Wakeman among many others, many who also appeared in Tommy such as Paul Nicholas who played Cousin Kevin.

I've actually not watched Lisztomania in many years but anyone who loves 70s rock operas such as Phantom of the Paradise, Ken Russell, Roger Daltrey, weird movies, horror, and giant cocks, you'll love this madness.

The seventies were weird, very weird.

After I saw Tommy, I proceeded to have a lifelong crush on Roger Daltrey, so of course, I went to see his next opus, Lisztomania. No mean feat as it was rated R and I was way below the age limit but luckily I was able to slap on makeup and a lowcut shirt and snuck into the movie. Both movies were directed by Ken Russell, whom I actually got to shake hands with a few weeks before he died about ten years ago. 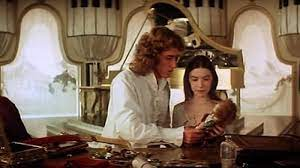 I couldn't find any video clips of father and daughter on YouTube. There used to be a couple including when they're playing violin and harp in heaven (like that picture above) but they've been taken down, or at least I couldn't find them today for this article.

You need to see this whole movie, it's so weird. 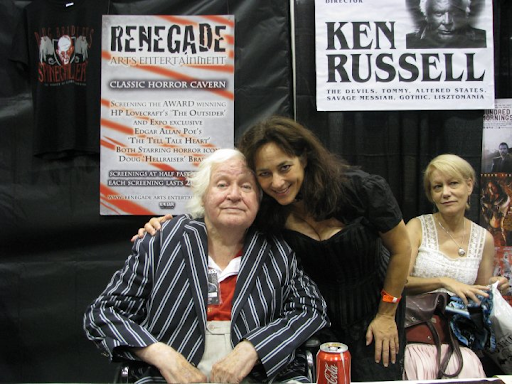 I got to meet Ken Russell in the flesh a few months before his death when he came to Toronto for Fan Expo and to show The Devils. (Eternally grateful to Shade Rupe for introducing us!) I took pix at the theatre as well but this is my fave. His lovely wife who was very involved in his movies with costumes and much more is in the background. It meant the world to me to shake his hand and tell him how much Tommy had changed my life.
If you've seen Lisztomania or even if you haven't, this one scene stands out, and that is of Paul Nicholas playing Wagner turning into a vampire and sucking the blood from Roger Daltrey as Franz Liszt. It's hot and kinky and weird as fuck.
Okay, the seventies are over, let's get back to 2021! 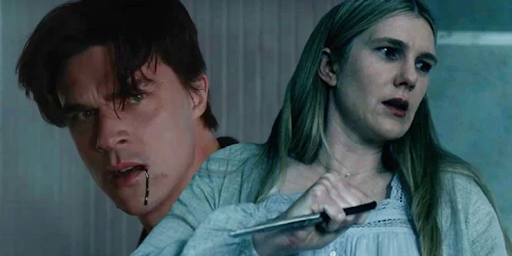 From when I first realized there was a father-daughter rivalry in American Horror Story Double Feature Red Tide, I thought back to Lisztomania. I'm sure there are tons of other movies and stories with this rivalry, but it was the one I resonated with as I am who I am!
Last week, I said that it was the finale chapter of Red Tide! Boy, was I wrong! I told you I try to avoid all commercials and ads and trailers for this show so I didn't know that there was more to go. I think it's over over now, but who knows?! I even try to avoid Finn Wittrock's Instagram so that I won't know what's next though he never gives spoilers but even a photo can sway my imagination! 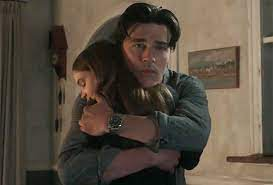 In our final episode, we have more Finn Wittrock and that's always a good thing!
Harry (Finn Wittrock) still dreams of going back to normal life, after all, he's now written five years' worth of best-sellers so he's good to go. However, his demonic spawn thinks otherwise.
Alma auditions for a prestigious orchestra and destroys the competition in the best way she knows how. We presume she'll get the part.
The literary writers are conspiring against the Hollywood writers; lots of inside jokes about how screenwriters aren't real writers and so on.
I do have to say that screenwriting is a completely different art than novel writing. Screenwriting is teamwork and more like a blueprint. A novel is a whole complex world reliant on the author's turn of phrase. Both ways of writing demand great skill and concentration, it depends what you like to do as a writer. And both ways of writing can take years to create material that will make any money or provide a living for the creator. 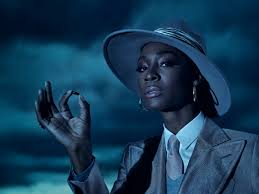 The Muse is a great shortcut and the agent coming to town is even better since she can connect people right away.
Anyway, the age-old battle between "real art" and "sellouts" is examined with The Muse and the monsters. Does anyone really win?
A monster is a monster and talent doesn't matter in the end.
I loved so much of the commentary and symbolism of this thesis as I'm a professional writer working in these worlds, not to mention I've had summers in Maine and Rhode Island, and I have children, so I connect on all those levels as well.
It was nice to hear actual New England accents in this installment!
Alma has had enough of dad trying to reclaim his humanity by his plans of taking his kids and moving back to New York, so she eats him. Bye-bye Harry...
The agent and the pharmacist have moved to Hollywood where they can really feed the masses. All hell breaks loose and it's great fun!
NOW I think that the Red Tide story is over? 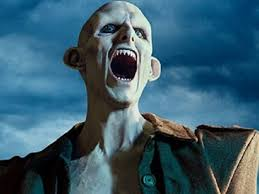 So, the student who stormed out of the screenwriting class...will he be in the next story? Is he writing the next story?
Shhhh, don't tell me, I want to be surprised!
Can't wait for next week even if Harry is dead. But no one is ever really dead in American Horror Story...
On a completely other vein...
WATCH OUT FOR CATFISH!!!!!!!
LOVE FRAUD!!!!!
IMPOSTERS!!!!!!!
I do need to say something else that's kind of bugging me.
Over the past couple of years, "Finn Wittrock" has messaged me on Twitter, Instagram, and Facebook multiple times. Sometimes I'll answer, usually I don't as there's no reason on earth that the real Mr. Wittrock would message me out of the blue with the types of messages I've received. Also, he has thousands of followers so accounts that are freshly made with zero followers created "just to talk to me" don't ring true, catfish people.
From what I've seen from the real Mr. Wittrock in his interviews, his Twitter, and his Instagram is that he's well-spoken, educated, and has never written in broken English that I've noticed. I've noticed a few other things about him that these messages don't contain. I've been conned a few times in other areas of my life so I'm extra careful these days especially on social media.
However, if by chance Mr. Wittrock DID message me, I'm sorry if I was rude but I don't believe for a minute that "real" Finn Wittrock has any reason to contact me for the reasons that so far have been used in the DMs. I can think of other reasons, and I don't mean anything nefarious or kinky, but none of these "Finn Wittrock"s have chosen that route.
So this is both an apology if by chance one of these dozens of messages really was Mr. Wittrock, so sorry, but this is also a warning to the rest of you, that lots of people love to troll people and get them excited to think that their favourite star is speaking to them, but the reality is, it's likely a catfish trying to get your real name, address, workplace and so on so they can commit identity fraud.
I've also had a couple of Roger Daltreys as well in the past year. No reason for Mr. Daltrey to contact me either though I'd pee my pants if he did!
Waiting on some Adam Drivers, Mark Hamills, and Tom Hiddlestons catfish, you know they're swimming this way!
Be careful out there, people!
Okay, not catfish but the 80s were kind of fucked up too!
Need some reading?
Check out my books on the brand new SCREAM: Chills and Thrills app! 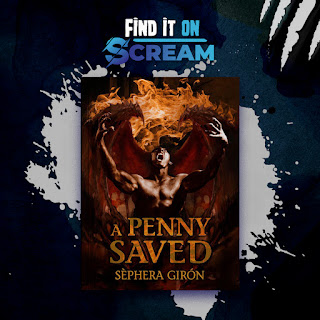 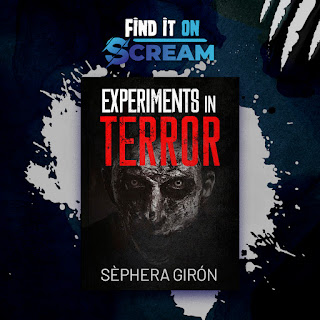 My novel, A Hearse of a Different Color, is the story of a witch who loves a horror anthology TV show, Scary Haunted Stories, and is thrilled to find out that it will be shooting in her home town including with her favourite star, Oscar Dominion! Find out what happens!

UPCOMING PUBLIC APPEARANCES
As Halloween approaches, watch my social media for events.
I'll be on Planet Lizzdom at 8 pm est on October 28, 2021 to talk about my writing.
I'll be at Frightmare in the Falls  in Niagara Falls on October 29 and 30, 2021 at The Great Lakes Horror Company booth where I'll be selling paperback copies of A Penny Saved, Captured Souls and Flesh Failure among other wares. I may even do tarot readings, depending on how the pandemic is going.
Autographs are always free when you buy one of my books or if you bring one from home for me to sign! I'll also sign for free posters/DVDs from movies I've been in such as Slime City Massacre and Killer Rack.
Posted by sephera at 14:44